Update on the Treehouse Part 2

Oh, my dearest friends... Blogging from from phone is far from easy.. But relearning to use my hand has been no easy task either. I promise eventually I will get around to posting on my other blog the updated pictures of that situation, we will just say that I am Not one to give up, lol. With that being said, it is still really hard for me to use my middle finger. From an artist stand point, I've had to relearn stupid things like how to hold a paint brush, and as of now I can only paint for a little while before my hand hurts. This is going to take a loooooong time to get somewhere close to right again. But with or without it(meaning i just dont use it) I will still create. -although my physical therapist has me taping it another one so I have to use it.
Ok.. I've been working on this tree house for a know over a year... I always seem to get going on it and then run out of supplies. If you look in my labels under treehouse I do believe you can find the beginning of it. Here in the past couple of weeks I have put in the front steps and the shingles. This was my first time doing shingles.. Thank goodness I plan on putting a lot of moss on it:) I have been filling up my 'treehouse' Pinterest board with lots of ideas- it's the first app on my phone! What ever did I do without this thing before I just don't know, lol. Anyways.. Getting a little sidetracked here...with such a tiny screen u can't see anything you've just written, so it's easy to have a duh moment..... Like I seem to be having right now, holy cow... Lol
Ok... The treehouse Katie!
LOL
I have also been working on the top. I had run out of the normal paper clay I use, so I bought a different kind, and it was almost as stiff as polymer clay. I'll have to remember to write the names down next time I'm at the store. Although it might hold up better on the top- like I said, I had a really had time mashing and sculpting. Yes, mashing is a technical term, haha. I also put an extra layer of cast material on the top as well to make it a little more sturdy.. Some of the cats around here think its their cat tree.. Lol.
I do have a family of Calico Critters- The Hedgehogs the are going to live in the house... And I think the idea of a bug in the top house is a super cute idea.. I have a book here with a picture in it that gives me an idea...the book is called The Woodland Folk in Fairyland by Tony Wolf. Beautiful book!
--OK.. I went back and looked for you- everything is labeled under The Mousehouse- you can see how the whole treehouse was built... And I have been working on it for three years now, not one. Lol 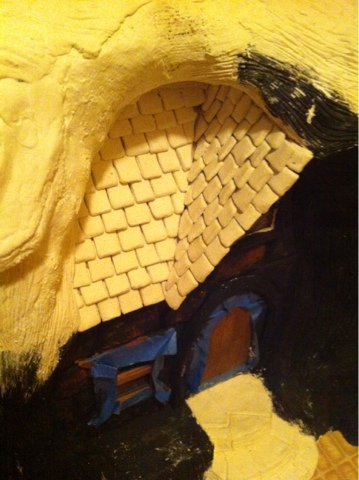 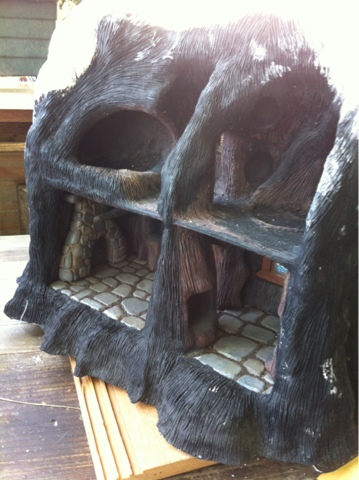 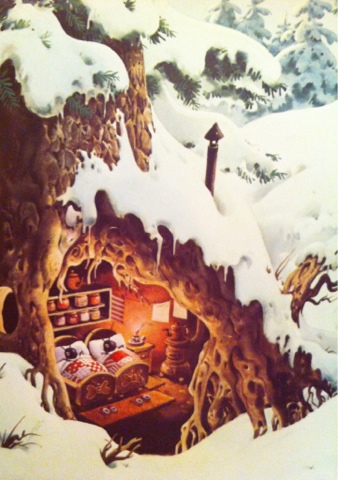 Oh Honey you should take it easy..the little tree house can wait you need to heal.

PS Yea I know I sound like a demented Mom

Katie, keep on plugging along. The treehouse is going to be fantastic when you finish. I want to live there. It reminds me of the Brambly Hedge books. Love it all. The front steps are really great. I like the curves everywhere. I will probably get your box in the mail tomorrow.

I love the tree house so far, so cute. And the hedgehogs will be a perfect family for it. I am thinking of picking up the same family for Ethan for Christmas. If you are up to reading blogs. I have some cute pics of Ethan's calico collection plus his new house for them.

I am glad you are back to blogging and creating.