Sunday morning the kids were restless.....so we took a drive down to the strip, and the kids took pictures, of the murals, from the back seat of the car. I started a skate shop for Drew a while back, and it's one of those projects that sit on my desk, and begs for me to finish it. I haven't found the perfect thing to put on the outside yet, so that's why it's still sitting.....So I thought we'd go look at some inspiration: Wanna go with us??

First is one of our favorites! Coming from a military background...this means a lot to me!
*taken from www.roadsideamerica.com:
Virginia Beach, Virginia - Flagship Motel's Military Might Mural
Mike and Sam's "A Celebration of American Heroes," proudly honors the men and women who battle to keep America safe from terror. On the 60-by-180 foot back wall of the Flagship Motel, located in Virginia Beach, Virginia, Mike McCloskey and Sam Welty painted a composite of Atlantic Fleet vessels and support aircraft to remind all of the September 11, 2001 attacks aftermath and contributions made by our military.

And here's a link to a better picture: http://www.angelfire.com/art2/largemurals/ 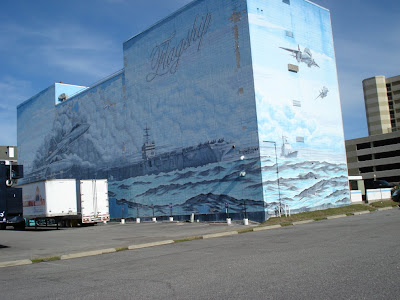 Another favorite of ours is all the sea life murals.....Like this Shark.... 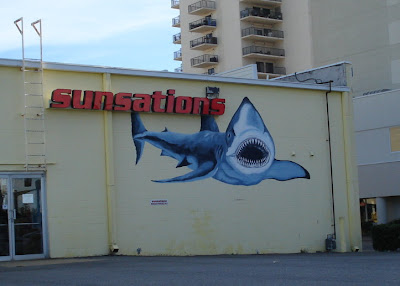 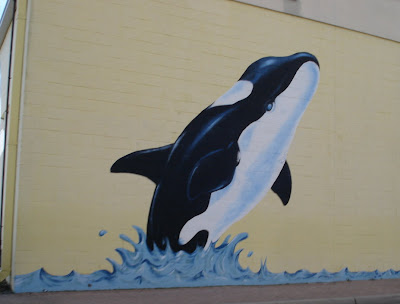 ...or what about an underwater scene......(wish the kids had said something about this, cause I woulda gone back around the block to get better pictures!!) 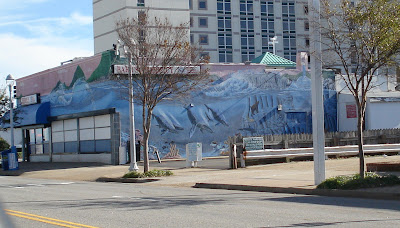 This sun is everywhere....but this one is our favorite! 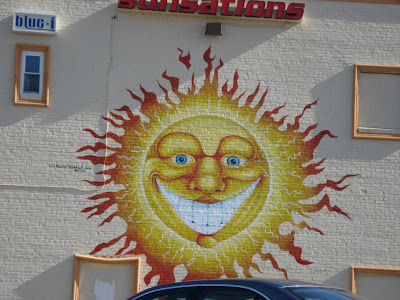 This would be cool on top of a building! 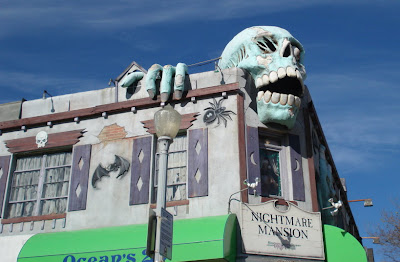 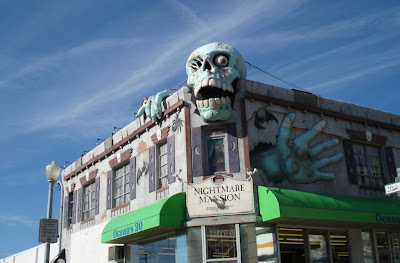 The outside of the indoor, in the dark....miniature golf building.... 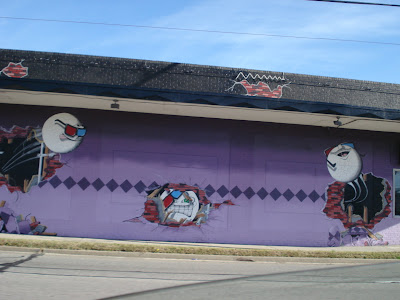 A memorial to honor for fallen officers....
(This mural and several others were done by 2 brothers that go by the name T.A.L.ent. Murals.....You can find more of their work here: http://entertainment.webshots.com/album/557396474ricQNK 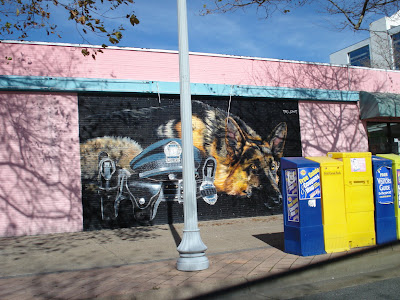 And look...there's even a pineapple!! 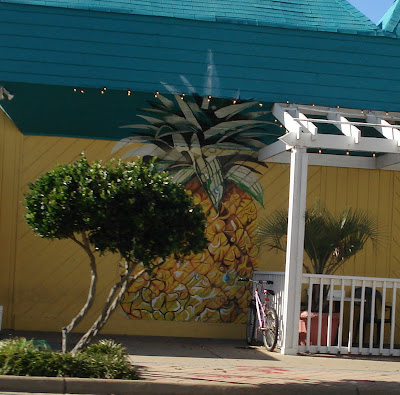 Thanks for riding along with us. We still haven't figured out what to put on the side of the building.....I want whales.....Drew wants a battleship on top of the water with whales swimming underneath.....and the bf says we can't have whales on the outside of a skateshop....that we need something more manly.....So, I dunno......first I gotta get the 'cinder blocks' glued on.
I know, I know.....I jump from one thing to the next.....I will be drilling that groud for the fire place this week, I promise, just don't have full use of my hands yet, and well, we all know that even with 2 working hands, I will still have problems. So stay tuned......I actually have ZERO doctor appts this week....so maybe I can get something done?
So, until next time:)
Posted by Katie at 6:11 AM

Wow - so many great murals in your area!! How fun of an idea to drive around and spot them... I bet I could find a few in dallas... interesting thought!! Hugs - ara

ARA! Dallas???? Say it isn't so?? We're big Dallas fans over here!! And I love to see any murals you guys have around town!!

Casey....I was thinking about that last night...I'm going to use cork to replicate cinder blocks...and then the design will need to go over that. I can paint it....If I put my mind to it....but it sure would be easier to use a transfer! :)

Well, you do live in a very interesting place! Will show the kids your pics afer school, I know they will love them. Liberty will be very excited to see the big pineapple because she still calls Cora 'the girl who likes pineapples'!
Mercedes

wow pretty cool, wish I could see that haunted house! you need to go and report to us all! that ocean mural is neat too. lots of choices...

This is such a fun post. Did you take the pics yourself (haven't checked the links). Casey's idea is great but I have seen your painting, Katie. A slow job but I am sure it will be stunning.

Mercedes...as soon as I saw the pineapple, too...I thought of Cora's kitchen!

Chris...my nerves can't take the haunted house, lol....but the kids want to go, so one day...they'll let you know what it's like:)

And Sans...My oldest, Drew took the pictures from the back seat as I drove around! It was way too cold to get out of the car:)