I finally found the head!! It was up under the curtains, which tells me, a certain kitty cat has been stealing my things again in the middle of the night. 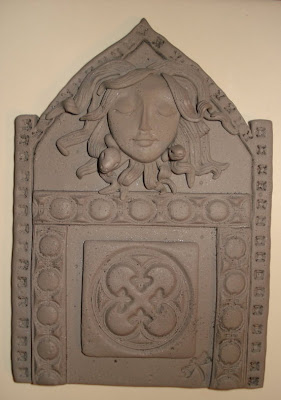 I did use a mold for the face, it was one I bought at Michael's a long time ago. And I went with an idea that Lireal from http://liraeldreams.blogspot.com/ suggested. (When you get a chance, go check out her blog....She's got some neat ideas, amazing stories, and a Beautiful White kitty:) So...I went with the Medusa look, although, I got a little carried away with her hair, and forgot to add in the snakes till I was almost done. I was able to put 2 in there.... 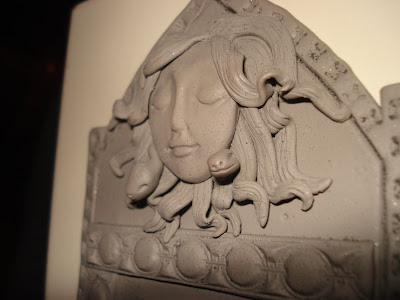 .....But they're not very scary looking....Kinda cute, actually....lol
Click on this next picture....and look at her face. I wet the face down, before I baked it...and pushed in some sand around her face. After I baked it, I used a tooth brush to scrub out all of the sand. (Next time, to make my life easier!, I plan on just using a piece of sandpaper to give it texture instead...I had a hard time scrubbing all the sand out of those little holes!!) But it's those little holes that makes it look more like stone. 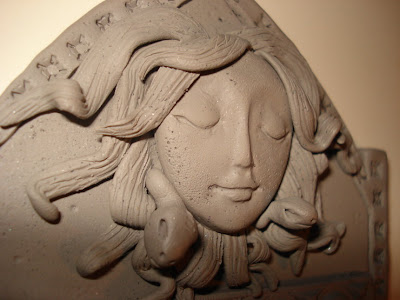 After I baked the whole thing again....I covered it in black paint and wiped away the excess. 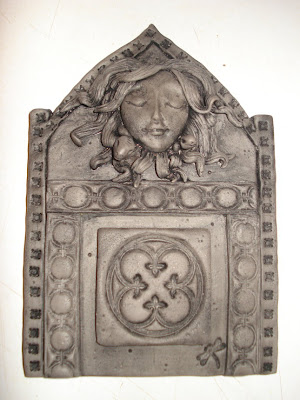 Looking at it now, I think I'd like to add some more paint to the bottom of it, But it will do for now. I'm not completely in love with it...But I think I will be by the time I get done with it. 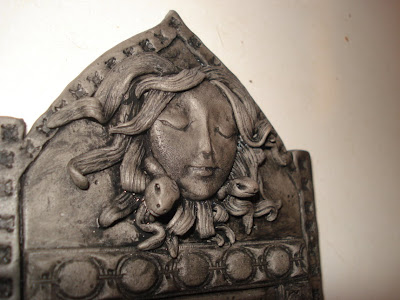 And Cora likes it, so isn't that all that really matters:) 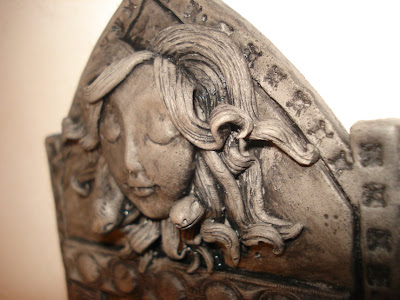 LOL...Now I get to build a bed frame and dress a bed:)
So....getting back to my personal life, not too much going on here, LOL. Made the mistake of going to the library and have been engrossed in books ever since. Found dollhouse books, polymer clay books, Lots of eye-candy to look at! Even found Angie Scarr's book!! I did manage to pick up a novel, and spent 2 days reading it...couldn't put it down till I finished it. And was rather disappointed in the ending...but it was a good read, so I didn't mind, too much.

Oh...and I've been trying ever so hard to make friends with the strays. They are on the porch every morning to eat....and I find them on the steps quite often during the day....They act as if they live here. LOL. Still trying to figure out how to help them, they can't live under my house forever!! ....That dang on Momma cat was out there the other day getting her groove on with Rufus, and I had to go holler at them. Asked them if the 5 they already had wasn't enough or something!! Good lord! How many cats do they think I'll feed??? So.......that's it....Reading and talking to the cats! I must find a way to get out more, Hahahaha!!!
....so.....
Until Next Time!!
:)
Posted by Katie at 3:45 PM

Katie, the headboard is a roaring success!!!!! Love it! Sounds like Rufus has a way with the ladies....Tell her Happy Mother's Day for me. LOL How's my possum?

Wow! I love your headboard--fantastic Medusa complete with wonderful snakes! Unbelievable! And, yes, you're turning into the crazy cat lady! LOL! I was letting our poor old lady cat, Priss in but then she was sneaking off hiding in the house which was a disaster as you can imagine. I am a closet crazy cat lady but DH won't let me get a litter box and make her an official house cat.

I think your headboard is perfect for a teenage Gothie. It is brilliant work, Katie.

Katie the headboard looks great. Can't wait to see Cora's Goth Room in all its Glory..xx

Katie, I love the headboard, and as you said the face is so cute.
The result of the expression of the face together with the gothic decoration is really funny...
hugs
Ana

Katie, that headboard is FANTASTIC!! WHat a work of art! Cora is so lucky to have you for a mother.
Mercedes

Your headboard is awesome!!! I think the snakes are cute too.... but its probably only because Medusa is sleeping.... just watch out when she wakes up!! Good luck with the kittys! -ara

Wow- the last pictures after you have washed it down with black are fantastic! It has turned out so well- I can see why Cora likes it! I have to giggle picturing you on your steps yelling at the cats to knock it off. Maybe Momma cat figures as long as she has a way to feed the babies she might as well have more! Nothing cuter than kittens :)Good luck on your sex talk with Rufus-hee, hee, hee----sneaks away laughing because it's not me :)

So good!! I love it. It will be great in the room. How are you going to dress up the bed? I cam imagine lot of black and silver... May be it's not Goth enough.

I can't wait to see the whole room come together. This will definitely be the focal point, wow!

OMG!!! Ive only just seen all your posts Katie, my blogging is really not working well at the mo!! I cant believe this its just amazing, I love it! How clever are you, that face is just perfect, serene yet scary with the snakes!! Well done you !! KAte xx

I think this head board is the best i have seen. It's brilliant and the face and the hair really set everything off to perfection.
I've always been frightened of Medusa but still i read the book over and over when little. Glad there are not too many snakes... lol.
It really looks like carved stone too!