Well.......I think these guys are here to stay...at least for a little while. I've been working with them everyday, trying my hardest to socialize them...but don't feel like I'm getting very far with them. I can feed them from my hands, and they come up to me in the morning, Meowing, for their breakfast....I just can't touch them...or they run off.....Well, all but one does, But we'll talk about him in a minute.

So...First meet the twins. I'm starting to be able to tell them apart....The one on the right has a black stripe on his nose, and he's a little bit smaller....The one the left is really shy, and generally hangs out with the black and white one. Yes, I do think all but one are boys~ We watch them wrestle, and well...you can tell:) 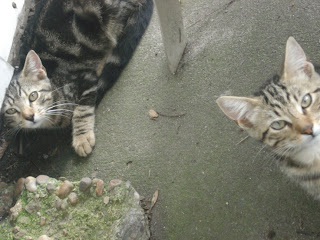 Here's a close up of the one with the stripe on his nose, it's a little black stripe, but enough to be there. 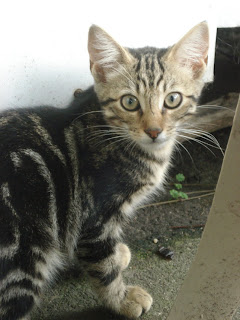 And here's a cute picture of the one without the stripe. I refuse to name these guys.....I'm Not going to get attached!! However, as you will see in a minute, they are starting to grow on me. 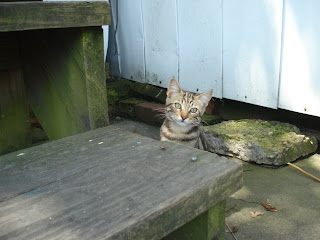 Here's another pic of the one without the stripes. If you click on the picture, you can see the girl kitty behind him. 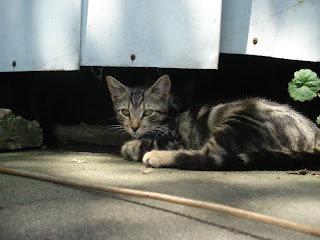 And! WOW is she purty!! I do believe she is a girl, and I think the only girl....and she carries herself like a lady. Funny that you can tell what they are by the way the act:) 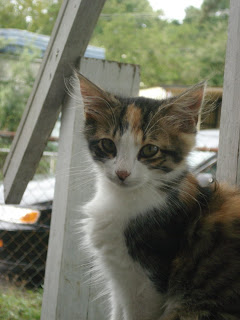 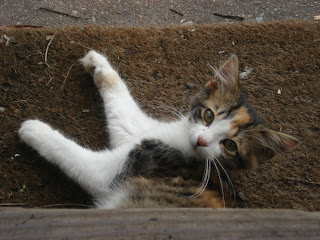 But this guy is the smallest of the group. He has a couple of white hairs on his chest, and few on his belly, but is mostly a black kitty. And he's a hunter!! He's normally the one I watch catching bugs at night, and he's actually really good at it. Yesterday he had some kind of cicada...I think, all I could see was it's butt and wings hanging out of his mouth, and it was big~ He must of had a mouthful...and he was trying to hide with it:) Too funny! Here he is sticking his tongue out for ya:) 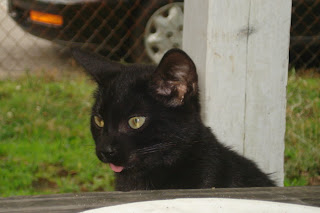 I so wish they'd let me get closer! I hate seeing eye-boogies in their eyes, and I just want to wipe them off:) This little guy is smart though...in the afternoon, I will go out there and bribe them with treats and this one will sit right next to me to make sure he gets his....but he won't let me touch him....Cora's in love with this one and nicknamed him Sphinx. 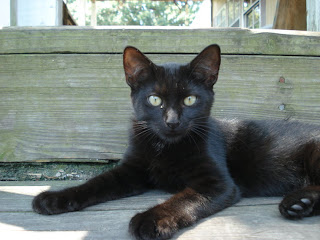 This next one is the last one, and he is starting to grow on me. He's the only one I can pick up.....that doesn't try and freak out on me....And instead, he plays 'possum'(lol, I almost want to start calling him Possum, hehehe)...it's really funny, cause he just goes limp. I think he's so scared he doesn't know what to do, but he'll sit with me. I had him purring yesterday....... 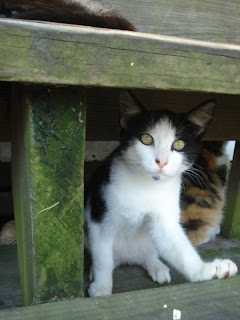 I know he's a boy....And I think he's also the biggest kitten! He's the first and last to leave when they eat. And he's just so freakin cute.....I love how it looks like he has black eye-liner on...and that tiny black spot on his chin!!! 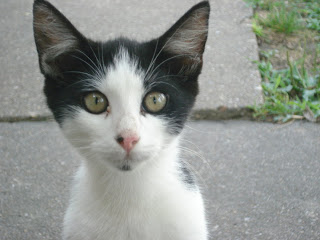 I so want to keep him, and if I can't....At least I know I can handle him, and hopefully get him off to a good home. The rest I still wonder about. What they really need is, a big farm to roam on...They'd make perfect Barn kitties!!
So....if you know anyone or have any suggestions, I'd love to hear them. How do you tame feral kitties, can you house break them??? Anyone tried?? Know of anyone who needs Barn Kitties???
LOL, Yes, I know I'm asking a lot, I just don't want to see anything bad happen to them.
Momma and Rufus are still here, too......but we haven't seen the opossum in awhile. Wonder if having all those kitties under the trailer scared him off??? Poor Fella!
I hope you've enjoyed meeting the kittens....I know I enjoy waking up everyday to their little faces:) Makes me happy! And I will be even happier when I can get them from under the house:) So, if anything.....wish me luck:)
OK.....that's it for now. No minis today.....still looking for purple fabric.......and black trim that I like.....May have to wait on it though......
So, Until Next Time:)
Posted by Katie at 10:59 AM

I love them all - especially the dainty girl. We adopted two feral cats from a rescue house many years ago. They were brother and sister and the rescue house called them coka and cola. We changed their names to shadow and bandit. They were both black and we had them for many years and had no problems with them. They had been living in a rescue house though since they were found as tiny kittens. There are many feral colonies living in back alleys in the city and the rescue unit removes the kittens and neuters all the adults that they can catch.

Awwwwwww, they are sooooooooo cute! Our poor old lady cat, Priss, wants to be an indoor cat so bad but she has never used a litter box in her life and I'm fearing you can't teach an old cat new tricks. One day I intend to have an indoor cat if I have to keep it in my basement/studio!

The kittens are VERY cute and look like they have lots of personality! Lovely photos.
Mercedes

They are soooooo pretty!! I can see why you've fallen for the B&W one, but still... can't seem to get that girl off my mind! Good thing I'm on the other side of the ocean or I'd just might... ;)
Taming feral kitties takes time... just keep hanging around and try placing food on your lap instead of your hand for a change. Good luck!! :)

Oh those kittens are absolutely adorable. The little girl is just so sweet! I don't know anything about feral cats. I hope all goes well for you with them tho.