Friday, my oldest, Drew fell while playing dodge ball, and after a trip to the ER....he is now on crutches for a week. He didn't break it, just sprained it.....and it's swollen! He has never been on crutches before, and it has been hysterical watching him!! Poor fella has a had enough time walking on his own 2 feet! (Yes! I laughed with him, not at him!) He went to his Grandma's this weekend....for some much needed TLC! Thank-you Grandma for helping!

Saturday morning my youngest son, Cameron had his last football game of the season....Kinda like a Super Bowl.....had an announcer and everything! They didn't win this game.....but worked their little butts off this season! This was his first year playing....and I don't think it will be his last!

Cora, my daughter got her Christmas present from her Godfather this weekend! Him and my BF took her and her bff to see New Moon!! I can't sit that long.....so I'll wait for it to come out on DVD. I had to laugh at the men taking her.....You know they were surrounded by girls!! LOL, but then again, I'm sure it didn't bother them too much..........and I got a whole afternoon to myself out of it:)

Sunday was Not a good day though! One of the kittens, Ginger got really sick over the weekend. Saturday we couldn't get her to eat, and then Sunday she wouldn't even drink water for me. Nor could she stand up. So I took her to the vet at Petsmart.....who told me that she needed to go to the ER vet right away. And then the ER vets told me she was so anemic that she needed a blood transfusion. I explained to the vet that she was a stray and that I was just trying to do what was best for her.........and that I couldn't afford any medical for her. Then another vet came out and asked me if she could have her! And I started crying! I was so happy to have found someone that was willing to make her better! I will say though that the vet tech at Petsmart even wanted her, and gave me her phone number to keep her posted. It was so hard walking away from Ginger, but I had to do what was best for her. 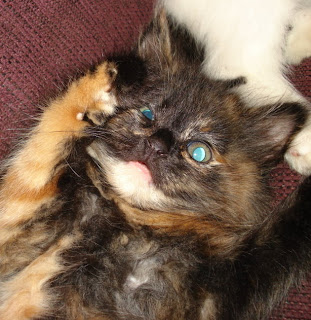 The ER vet told me to call up there in a few days to check on her! Thank-you! Thank-you! Thank-you!!! ..................I still have Fred....he's curled up in my lap right now napping. Hopefully I can find him a good home, too!
OH...lol......I almost forgot about the possum! Sunday morning...when I woke up, I checked the trash cans in the back of the house.....(because I had heard a bunch of noise out there during the night)....and I found one of the possums in there! So I called animal control, who promptly came to pick him up. As I was telling Casey, I think there's 2 possums.....going back through my pictures....I noticed that they have different markings. One has black rings around his eyes...and the other one doesn't . I trapped the one without the rings.....so I'm guessing the one with the rings is still around.
I am also way over due with a post on my other blog......I saw my neurologist last week for a follow up.....and while I was there, I got a TENS machine. It provides electrical stimulation to help me with pain management. I read that it also helps for muscle spams and helps get blood flowing...I really need to call them and speak to someone about all the different things that can be done with it.....But I will say, so far, I love this machine! Besides using it at home, I used it in the ER, and my back didn't hurt at all from sitting...I used it coming home from my son's game~ it was a pretty long ride, and I've used it while grocery shopping....Keep your fingers crossed that the insurance company decides to cover it, cause I really don't want to give it back!
As you can see, I haven't made a thing! My Mom's birthday is Wednesday and I still need to build a frame for a mini painting I painted for her. Also need to get a magnet glued onto the back of one of my prep boards for her. She doesn't collect minis, but she does love it when I make something:) Thinking about turning the painting into a Christmas ornament, or something....still thinking on that. It's going to be another long week.......We're suppose to be going to DC for Thanksgiving~ and hopefully while we're there, I can get Mom to help me finish Cora's bed for her Gothic room.
LOL, So If your still reading, Thanks for listening! I will get to the minis one day soon.........
Promise!
Posted by Katie at 5:41 AM

Oh my goodness Katies, how lucky for the kitten that the Vet took her. Bless her heart!

Here's hoping that the insurance co covers the TENS machine and you get some down time soon. Hugs

Katie- I think I must be overdue for a good cry because the tears welled up instantly for Ginger. I hope she gets the care she needs and pulls through- sounds like someone that really cares and loves her already has taken her from you- what a blessing. I am glad to hear you got a tens machine- I will cross my fingers for you that insurance lets you keep it. My hubby had one for awhile after surgery on his shoulder and it really helped him.

Have a safe and fun trip over thanksgiving!!!

With so many stray kitties, it's so great that someone wanted to take your little kitty and help her get better. That's so great! Have a great Turkey day!

Katie, you write me privately about the cats and don't even mention that your son sprained something?ROFLOL BTW new theory about the possum....Maybe it is just one possum and you saw it at different times....Once without eye liner and the next with! Glad the machine is helping!

I'm so sorry to hear little Ginger got sick.. she's a gorgeous wee thing, and if I lived near you, I would've happily offered her a home. So glad to hear that she stole the vet's heart though.. lol! Yay for her finding a forever home! Good luck finding one for Fred as well.

I just saw New Moon the other day with a friend and her 16 year old daughter... movie itself, meh. Listening to all the girls in the audience making swooning noises when "Jacob" was on screen and more so when he took his shirt off... rather funny!! :P

Good luck with the insurance company too.. I know all too well what it's like coping with constant pain, so if the TENS machine is helping at all, then I really hope you get to keep it!! *hugs*

AHh, the life of a mother Katie! It's just one thing after another isn't it!
Good luck with the insurance!
Mercedes

Sorry you had to let your Kitty go but it sounds like she's in good hands :)