Ok, So I've been digging through everything around here, trying to find some really cool things to scan...and this is what I have so far. The vanilla envelope came from a special friend, so that makes it important to me. And not only does it have a Moulin Rouge address label, but it has some really neat stamps on it, too....and it came all the way from New Zealand!! I actually stuffed these to give them a little character. Next is the one with the dragons...the one on the right....it's one of Drew's letters that I have kept, and thought it would make a cute addition to the Skate Shop. Under that is the cow one~ it's one of the last letters I got from my Grandmother before she passed away....And she Loved cows!! 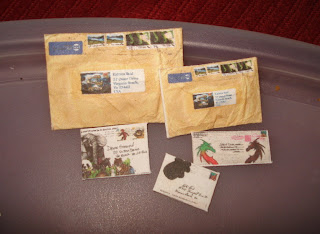 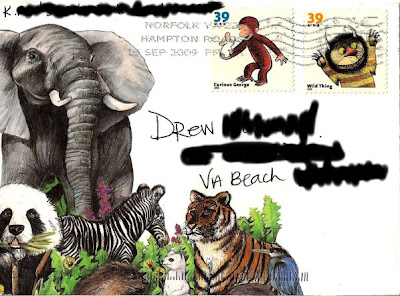 My last picture is of the kittens. Yes! They're All still here. And they're not so little anymore. Here, the bf has the front door opened and is trying to lure them in the house with a little wet food. The one up front, who's head isn't in the picture~ is our cat JD. And the kittens are....from left to right.....Bella~ AKA` Precious....She's so Purty!! Next is Fuzz and then T-boy(short for tabby boy), the twins. The black one is Sphinx, and my buddy Possum is the black and white one. They were all sitting there licking their lips!! It was so cute!! 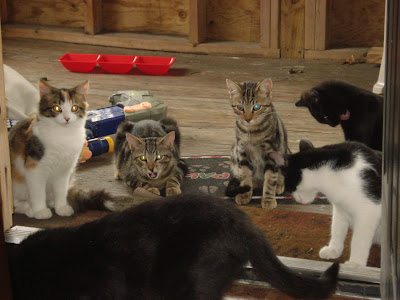 Love the pics, the mini letters and everything but I go so angry while reading what happened to your son and you !!!! People can be so SELFISH and uncaring!!! I think I would have shouted very loud against those.%&$#....I will not say the world but you think at the worst nsult you can! Hugs to you both

Your miniature letter are so precious! I know you will love just looking at them in your dollhouse!

I just love your little letters. What a great idea to have miniatures of the real thing. The cat picture is cute too - especailly Bella - she is so beautiful.

When I read about about you and your son's incident I understand how you feel. Drivers the world over are soooo ignorant. My husband lost a load of wood panels when a car in front of him stopped quick and when he slammed on the brakes, the load slid out across the road. The cars all honked at him, gave him the finger, cursed - but no one helped. It is very hard to pick up 4 x 8 sheets of plywood and paneling by yourself. They did not even drive around the sheets, they drove right over them. Finally one driver stopped and asked if he could give him a hand and my husband said he would appreciate it. Then the guy clapped his hands, laughed and drove away. People can be so nasty.

Your mini mail looks AWESOME. How wonderful that you have kept all those envelopes. I'm thrilled to see my envelope as a mini but now I'll see if I can find a more colourful and interesting one to send you next time! You guys have much better stamps than we do though!
Mercedes