LOL! I still can't believe I only blogged 12 times in August! That's crazy! Hahaha~ Shows you how un-creative I've been. I promise though, that once I get back on track, so will my blog. But for now, bear with me....I just have to show someone my 'Happy Moments' of the month! 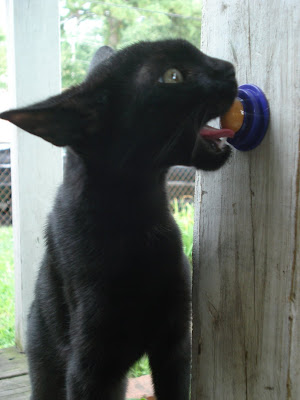 The kittens are still here! All 5 of them. They have taken up residence under the trailer.....No, I still can't keep them all.....But I can't part with them either. However! I know the time has come that they will need to be fixed soon, or we're gonna have problems! And speaking of problems....Momma cat has taken off...I don't think she's far, I just haven't seen her in a few days! But, the last time I saw her, she was as big as a house! I'm thinking she's gone off to make her 'nest'.....I'm sure when she's ready, she'll be back. 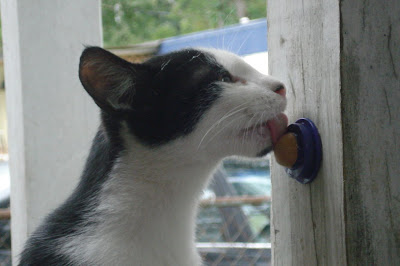 So, yesterday I bought these 'cat treats' from Pet Smart. Hehehehe......It sticks to the wall, and is this hard chunk of chicken flavored stuff. (Pounce makes it, comes in a little purple package)......Anyways, Guess who spent an hour outside yesterday, Laughing her butt off! Yup! Me! Hahahaha....they were cracking me up licking! I know their little tongues were tired, but they just kept licking!!! And Licking! So funny! 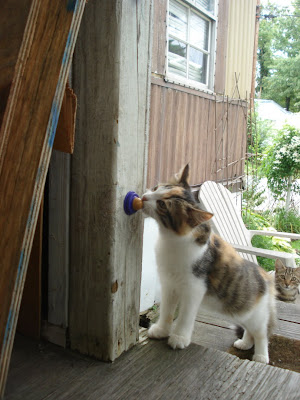 Let's see........My youngest Cameron started Football!! And The men in my family are quite happy now! He is playing center for the Cowboys...which makes the bf Very happy for he is one of those 'Die hard Cowboy fans'. I am not a football fan, but have learned to make room for it in my life.....I have my Art and they have their sports....keeps us all happy. Anyways! It was fun to watch their first game....And I was most impressed with Cameron!! LMAO!! This is the kid that was nicknamed 'Pockets' when he was little.......he played Basketball, but most of his time was spent in the middle of the court with his hands in his pockets looking around. I tell ya! Nothing is funnier than watching a bunch of 4 year olds play an 'organized' game!!! Now that he is older~ I think he will be fine!! Plus, as you can see.....his uniform has No pockets! LOL!! 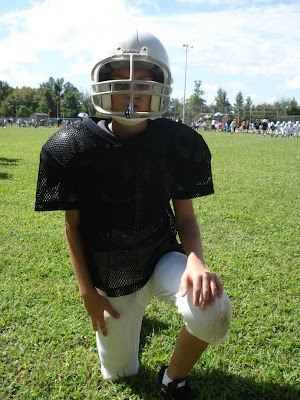 I also had visitors a week ago. The love of my life and her family had to come into town for some personal reasons, and stayed with us while they were here! I haven't seen my Jackie in years! And it was so good to catch up on life! I miss her......and didn't realize how much until she was gone again! She lived right across the street from me and we were inseparable!!! We scrap booked....and even started playing with clay together!! I loved having her around for inspiration!!! But, life moves on, and they had to move to South Carolina years ago!! She got married:) And had a baby!! Here he is, sitting at Chick's Beach....Yea!! I made it to the beach once this year! Woo Who!! (BTW! This is pathetic seeing as I only live 15 minutes from the beach and practically used to live there with my kids.) 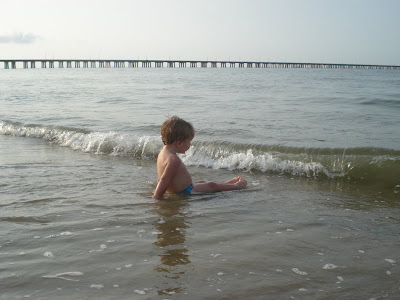 Jackie was also amazing at finding Good Junk!!! LOL! She's the one that got Cora her first doll house.....the one that Otis was sleeping in, in the last post. Someone was throwing it out....so she grabbed it, cause she knew "I could make it pretty!" LOL! And while she was here.....I was able to show her how far I've come in the past couple of years with miniatures! Even had her drooling over the HBS catalog while she was here. Wish she still lived across the street! We could make some amazing things together!
While she was here.....She found this. The guitar, not Otis. And then she gave it to my oldest! Thanks Jackie! LOL...The bf said "It's Ok, Her kids will get Drums for Christmas!!" Bah hahahaha!!! Oh, it's terrible! Poor kid has to go outside to play......and I'm almost ready to send him down the road. I just don't have the nerves for noise. And believe me, till he learns to play something.....it's still noise! LOL.......and when it's not being played...Otis keeps watch over it! 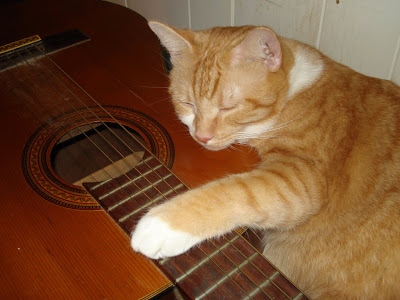 So that's about it for now. Hopefully this month will be more productive! I have so many projects to finish, start, ect.......It's all so overwhelming!!! But it keeps my mind off the other crap....
So, until Next time.....
Posted by Katie at 6:06 AM

These guys are too cute! And that treat thing is such a fun way to get them to come out to see them! -ara

OMG- I wish I could come and take all of those kitties- they are all so pretty! I am going to be looking for those treats- my cats would love those! Of course, love the pic of Otis too :) I'm so glad you got to visit with your friend- crafty friends in real life are the best- and looks like you got some r & r in there too :) Congrats to Cameron and a big hug to you Katie!!

Katie, I hope that the kittens don't learn to do what my cats do with those treats. The second time we bought them, Mookie pulled the whole thing off of the surface that we had it attached to and ran away with it! LOL Good luck with yours!

Oh I adore those Lickin' Kitties!
So Cute I must tell me daughter to buy those for her Pickles
I luv Cats!

Katie you just made my day! The kittens are sooooo cute, I'd almost fly in to come and see (and take home) all of them!!
Good thing I don't have the cash for the flight LOL!!