For those of you that don't know......This is the inside of Katie's Corner. It's My first Big girl dollhouse.......and I made it from a roombox kit. If your interested, you can see the beginning of it in the very beginning of my blog. The downstairs is a general store....and upstairs is where I'd live if I could:) 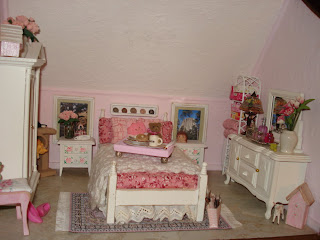 I had to start under the bed.......The Art supplies had been strolled all over the floor(which is actually the way it is in reality, but hey! This is the land of make believe, right, LOL!) The other 2 boxes are labeled Blankets and Sweaters....... 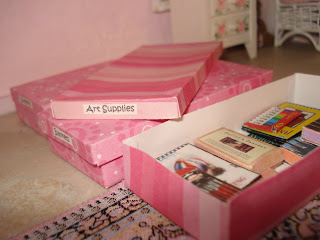 Next I re-stacked the shoe boxes....None of these boxes are full.....yet. 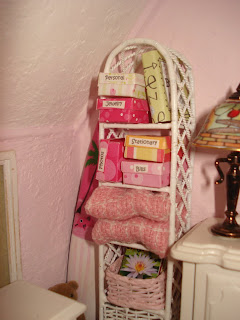 I also went ahead and put some of the magazines in a basket Mercedes made me.... I also moved that bear and purse down into the corner.... 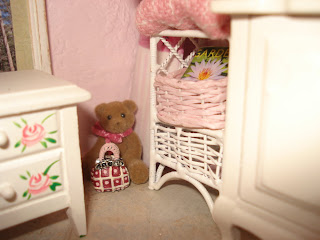 The rest of the magazines went into another container that Mercedes made for me.... LOL~ Yup! That's a Playgirl Magazine with Brat Pitt in front!! Hahaha.....I thought it was funny:) 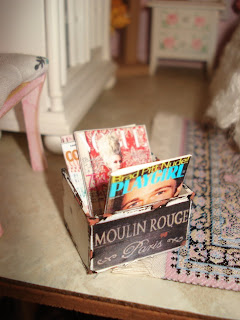 I slide that container under the chair I made....and filled it up with some books. The Canadian Bird Book that Doreen made for a bunch of us in in front. And one of the clay dolls I've been working on is sitting in the chair. 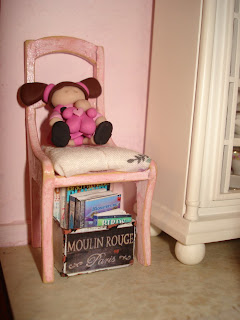 I rearranged the items on top of the night stands. There's a jewelry box, a sketch pad and a pack of markers laying on this one. 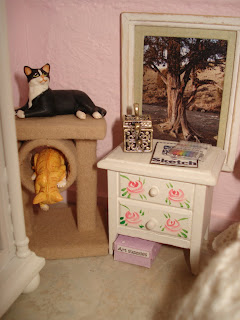 .....and on this one is a finger nail polish kit that I made, a phone and a Dragonfly container that Mercedes sent. Actually, the end tables were also a gift from Mercedes:) She sends lots of good stuff!! 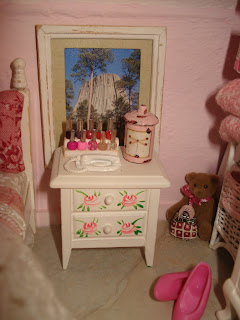 I rearranged the serving tray that was on the bed. I just added the flowers in the corner, thought it was more girlie that way. 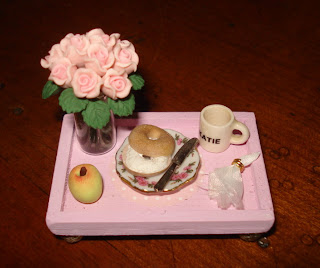 AND! I finally glued this: 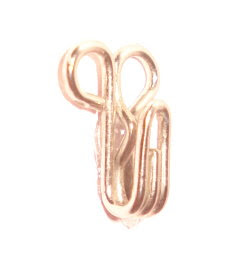 ...to the wall. It's the hook from a hook and eye set. I wanted to hang this beautiful cross stitch panel that MiniKat made for me, and I had just been putting it off. I was afraid that cat of mine would get it, so I mounted it in the back corner. My dollhouse kitties are well behaved, so I Know they won't hurt it.......and seeing as it is on the other side of the big cabinet in that room, I don't think Otis can get to it. Now I just need to figure out how to hide the ugly hook. Either a button or something made of polymer clay will work, huh? Any other suggestions are welcome! 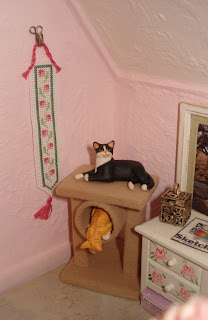 And I was so busy playing inside the house yesterday, that I totally missed what had happened to the outside. Now, we knew this would happen, and I'm surprised that they actually lasted this long.....But my Corner Shingles are missing??? Wonder who would of done a thing like that??? 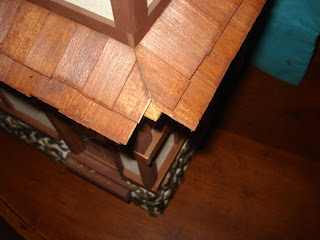 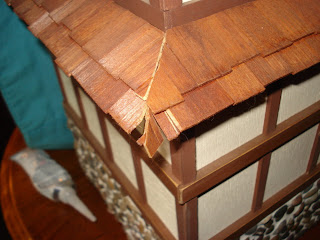 Seems like Otis is just trying to give you the real house feel, messy rooms, a roof needing repair.... what a thoughtful cat - hehe! Everything looks good! I bet a small button would look great on the hook! -ara

Oh I want a room just like that!lol
I luv the pink, really lovely and bright!
It is adorable!

Must have been therapeutic "packing" the house. You sounded like you enjoyed it except for maybe the missing shingles.

Oh I remember Molly scratchin' at the shingles on one of my houses!
I have had to add a few now I have a cardboard box for her only to scratch on lol
OOO I hope they don't touch that lovely bell pull! thats too nice!

That bedroom is just GORGEOUS Katie! I just love that you have filled the boxes and packed so many little details in there, just like a real room!
BEAUTIFUL Katie!
Mercedes