Alrighty then....look at what I did!! And even better..... I found the rest of my pics! I'm such a moron some times!!! Not that they were where they we suppose to be, but when I uploaded Picasa.....It asked me if I wanted it to search my computer for any other pictures, and I said yes! And it's smart little self uploaded all my pictures! Awesome! Now I just have to figure out how to use the program.... So I figured I'd start with the Treehouse.

You only get one pic for now....I'm still figuring stuff out....but just hold on, cause Ya know I'll be back with more! Besides I need a break from reality right now, and what better way then to blog, lol!!

Well I had to forgo the Styrofoam idea...didn't have the money, and then I came up with a cheaper way to build the base....Remember, not to long ago, I told you about the model train DVDs that I got from the library....there really is some good info to be learned. Anyways.... So I took a bowl of water, and added Modge Podge to it.... Then I bunched up a wad of newspaper, soaked it in the mix of gunk before I stacked the wads of paper on top of each other. Then I paper mache'd it...took strips of newspaper and layed it over the wads to create a surface to work on. And then Ah-ha...... A tree trunk started to take shape! 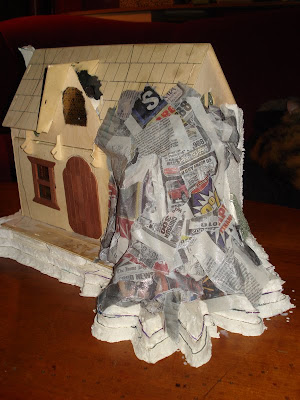 WOOOOO HOOOOO!! I'm glad you're back Katie and can't wait to see more!