Last summer I participated in an International Summer Swap.... and I received this Amazing bikini from Auxi. And have wanted to do this ever since! :)

I had plans to take Miss Pig to the beach, even took her to the beach house when we went...But she never made it to the actual beach:( ...So... This morning we got up early (because I really don't want everyone watching me 'play with my dolls') And took her to Chic's Beach:) You can see the Chesapeake Bay Bridge Tunnel behind her.....and if you look close- those are my 3 kids in the background:) And they say I never take pictures of them anymore, lol. 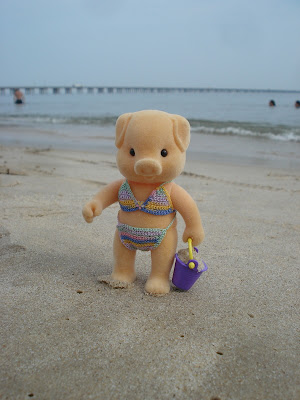 A girl after my own heart... She decided to build a sand castle first. She went walking for something 'special' to put on it.... But this green stuff was not it. No way was she touching That! 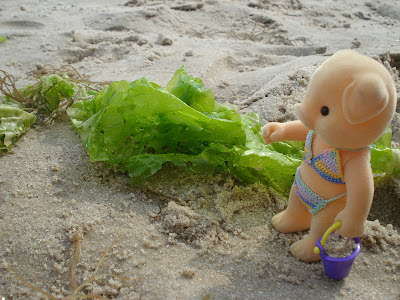 She found a few shells and built a modest castle. 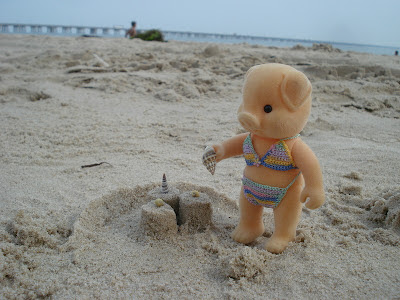 Next time I will bring better tools for her to build with. 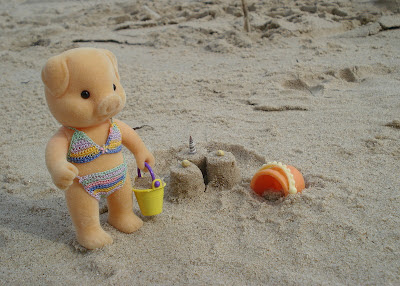 Quite pleased with herself, she decided to relax for a little while... But the sun was just a little too much for her delicate skin. 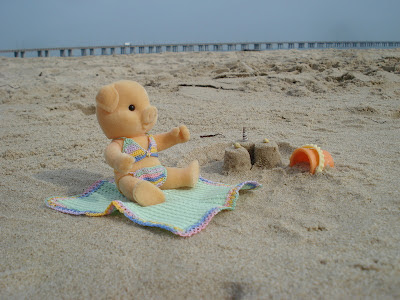 Luckily I had one of those Cocktail Umberella's in my purse for her to borrow. She built a mound and said she would get better coverage if it was up there... 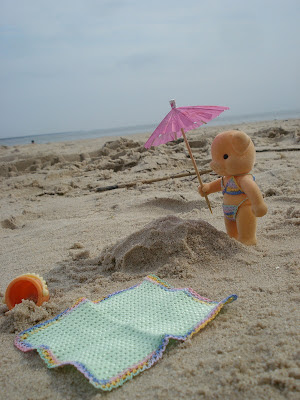 I didn't argue... I just enjoyed my time talking with a grown up. 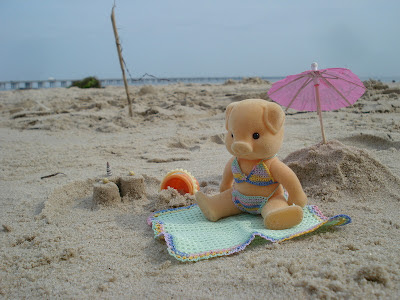 After awhile she decided it was time to sunbath for a bit. I only let her lay out for a little while.... I wasn't about to let her experience what I did the last time I came to the beach! 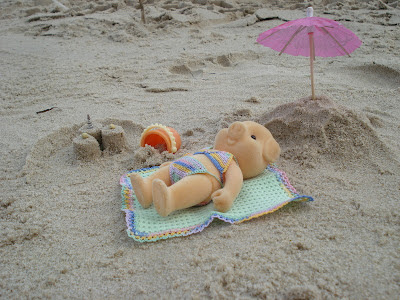 Hopefully we can do this again soon... And next Time I'll remember to bring a shovel!

These are just too cute! Love them all.

Too cute. Love the beach. Thanks for the story. Needed it this morning where here in NJ it is already in the high 80s and it is not even 9 a.m.

Katie, It is perfectly normal to take a pig in a bikini to the beach and photograph her...I take a 5" witch to Las Vegas and snap photos of her. Actually, when we did it in Carmel CA, I made a few new friends and so did Tessie! Perfectly normal friends.....

Such a cute post! Is it bad that I am jealous of a pigs bathing suite? I am not sure I could pull it off as well however lol. Hugs, ara

I enjoyed reading that so much! That little pig is so sweet! Plus, don't be embarrassed to take pics of your little pig! I think it's fantastic that you do things like that. Just have fun with it. I certainly enjoy it!

Katie, this is so, so cute!!! what a sweet post! this bikini is just perfect to miss Piggy, she looks perfect! it is a pitty she is alone in the beach, next time she must go with her boyfriend....