Someone got a new Dress...

Well, I couldn't have Miss Pig running around in her bikini.... So I made her a dress:) Besides, if you could of seen what her back looked like with the bikini on, You'd of laughed! The strings were to short to tie around her, so I used tiny bits of blue tape to attach it to her. It was a mess... but it worked:) If anyone would like for me to do a tutorial on the little dress, I can... it was really simple. 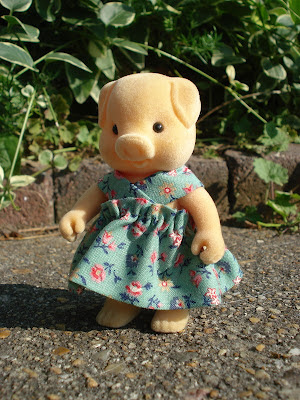 ...and then you know how it goes, You can never make just one. Everyone decided they needed a dress, too. Actually, I made the yellow one first and even though I love a dress that hits the floor, I decided the next one should be a little shorter. So then I made the dress for Miss Pig. Then I started cheating. The purple dress is just material folded up and wrapped around, and held in place by a headpin... And the pink one is held together the same way. I did however make 2 pleats in the front of the pink one to give it a little more volume. I think they're happy.... for now. 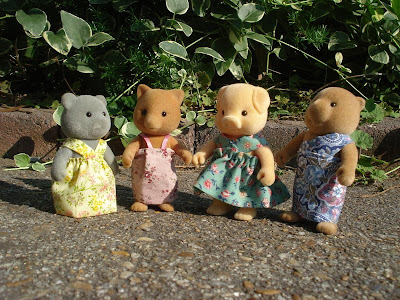 I've also been working on bits and pieces for the Glass House. I sat last weekend and watched the new Alice in Wonderland movie again, and cut out printies that Ira had sent me so long ago. OK... so I am really bad about finishing things, but they do get done, one day! I even put poppy seeds in each pack to make it feel and sound like a real seed pack. 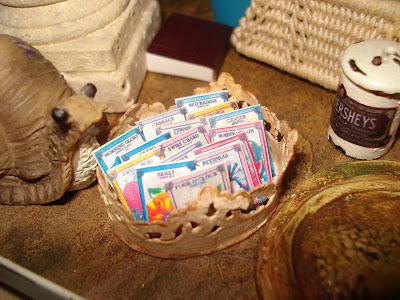 She also sent me the bulb packs... which now house seed beads:) Let's see.... I put the marble in the urn- not really liking the marble, but it will do for now- to me it's one of those big glass balls people put in their yard:) And then there's some new books. I bought them here. I put one behind the bulbs and the other two, because they're so colorful, are on the foot stool so the ladies have something to read. ...There's a metal wheelbarrow on the table- that's a monopoly piece. Oh, and I swapped out the panda for a polymer clay doll I made. 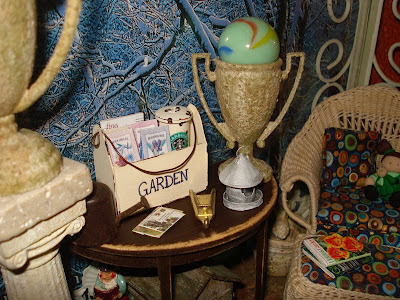 I will have better photos of everything when I figure out how I want it. LOL.. It changes daily.

I love all of the little clothes. No naked animals running around now....When are you going to start on clothes for the cats?LOL

Pig family looks great with the little new clothes! they are so cute! (My Calico family is still in the box awaiting for a home...)