I'm not sure if it's because there's 3 new kitties in the house.....But Otis has been doing some really strange things these past few weeks.

I bought another litter box so we'd have one at both ends of the house......and Otis decided to sleep in it instead! 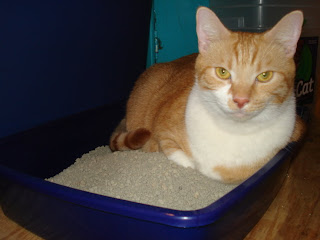 Then he decided he wanted to explore higher grounds....he;s actually never been up there before, Or should I say I've never caught him up there before.....And man was it funny watching him wiggle himself into that 3 inch gap! 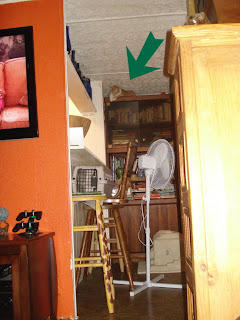 I also found him napping in a basket in my son's room.....I've never seen him sleep here either!! 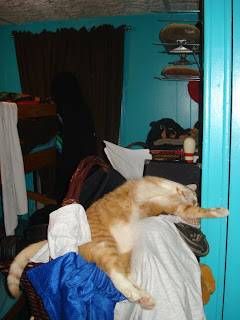 This is where he normally sleeps (when he's not on my lap that is)....but he normally doesn't sleep like that either. And Yes, He's sleeping!! So was she.......but me being in there with the flashy thing made her open her eyes...She sleeps sitting up sometimes. 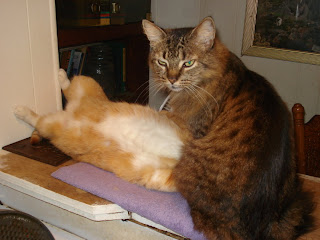 Here they are again....they're so cute together when he's being nice! 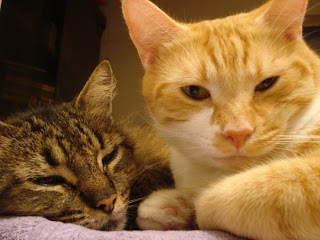 And for my last pic.....Thought I'd show you where he sits when one of us is on the computer...He's sitting in my son's lap in this picture, but like I said before, He's normally in my lap! I think he likes reading the blogs along with me!! 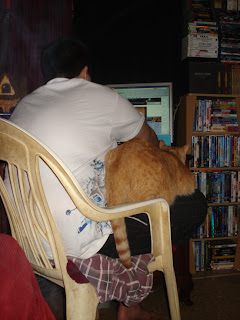 I still need to get some 'good' pics of the kittens......they tend to sleep all day under the bed, but are starting to hang out with us a little more. I can actually get them all to purr now.....and I even got the little girl to sit in my lap for a couple of hours the other day:) The little black one gives me head butts now......and the little tabby one is still confused! You can tell he wants attention, he rubs up against everything he comes in contact with....but as soon as you try and pet him, he runs under a bed. He's sweet on roast beef though....catch the bf in the kitchen all the time handing it out to all of them!!! Naughty bf! Saw Momma and Rufus this afternoon......So all is well in Kitty Land. Oh....and finally told my Mom about all the cats, YIKES!!! Knew I shoulda kept my mouth shut........But I just can't help it.....never could really. I have this soft spot for kitties, What else can I say?? Thanks for looking........I'll be back later with some minis, Promise!! :)
Posted by Katie at 3:01 PM

Cats are wonderful like this for fitting in small gaps.
My neighbours cat Molly sleeps on top of the computer for warmth.

Otis is still my favorite. Maybe he is dreaming that he is laying on a beach somewhere in all of that sand.LOL Go Otis!

PMSL at the pictures of Otis he is one in a million. He just makes me smile..x