OK then......Let's talk Candles! See the green one in this picture?? It was made from a metallic Crayola crayon!! 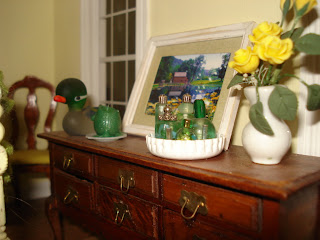 And here is how I made these.........Yes! they are real candles, in miniature though! I just used DMC floss (the stuff you use to cross-stitch) and cut it into a 2 inch piece, then I separated the strings! from this one little piece....you can get 6 wicks. Then the dipping begins. I start by dragging the string through the wax, being careful not to set it on fire. I was using tea-lights to make these, and had to learn to pay attention quick! OK, so dip, and set aside to harden...then dip again...and set aside to harden......and, well, You get the picture, Right?? Look at the numbers in the next picture...it might help. Once you get a little built up on the wick, you can start to shape it...hence #3~ one is long and one is short and round. #4 shows you what it looks like after you've dipped it a lot!! Don't worry about how wonky it looks, once you burn it down, and the wax starts to drip down the sides, it will look like it was meant to be! 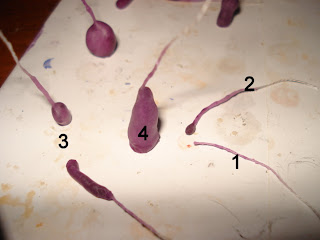 See what I mean. I used a crayon called Robin's Egg Blue to make this one...and thought of Nikki and her Robin Eggs the whole time;) 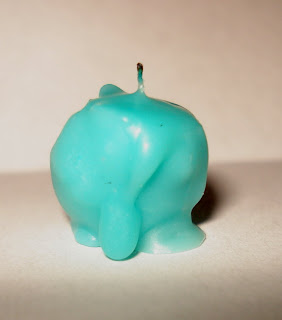 And the bf even got involved. He used an elephant bead....and made a mold out of polymer clay. He's still 'perfecting' his idea, But I think it's pretty freakin awesome for his first try! I'll make a miniaturist out of him yet!!! And no the elephants feet aren't dirty~ He used a glitter crayon to do this one, and all the glitter settled at the bottom. 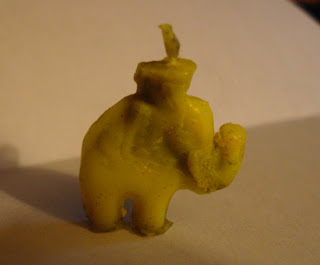 ....and here's my growing collection.....LOL! Red, and Yellow and Pink and Green, Purple and Orange and Blue....I can sing the rainbow......Oh, sorry, but I've been singing this song for the past few days, and it's stuck in my head! OK.....I'll just put it this way........My Mom bought the kids a box of crayons that has over 150 different colors.....and well....they should of hid it from me if they thought they were ever going to use them, Hahaha!!! I know I am a terrible Mom!! 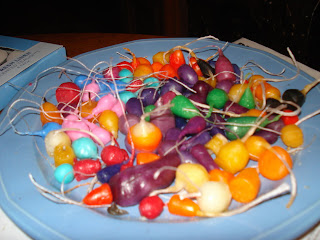 And here are some of the ones that I have burnt down. I dunno, is it me...or did you ever play with candles when you were younger? Did you ever take a bottle and melt wax down the side to see what happened??? Well, I did, and I find it very addicting! The problem is though, with these~ you only get to watch them burn for a minute or you'll end up with no candle! And they're so addicting!! Oh, and you will see some candles with thick wicks, and some with thin. That's because at first I was using the whole 6 stands, until the bf came along and told me it was to thick...so I started using 1 stand instead.....The thicker wick makes for a bigger flame, too. 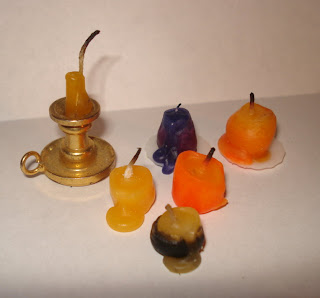 Well, I can't find my book with all the juicy details.......so I'll have to wing this. Feel free to correct me if I'm wrong here. The wax balls are conjure balls. They are used to cast spells, and when I was reading about them the other night, I thought they'd be really cool in miniature. I think that your suppose to through these up on your roof for protection......or you can make black ones for evil spells......I want to wrap these up, but can't seem to find my cellophane, so you'll have to do with a repeat picture to remind you of what I'm taking about. I just dipped a little moss into the wax, and formed a ball out of it. You have to melt the wax first....then let it harden up a little before you start playing with it! And I warn you know~ IT"S VERY MESSY! I've got it on my clothes...the table, a blanket, the carpet....but not Otis, yet, LOL!! 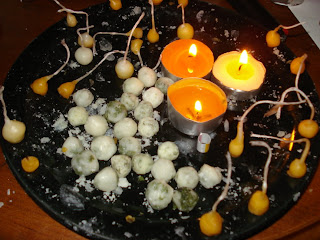 They are awesome! Really really cool, I'm gonna have to try that too. Thanks for explaining how you did it :)

ah, I was wondering what the moss balls were- too cool! I would never have guesses that! If I didn't have a husband I would have already driven to your house for those kitties by now- I am so glad to hear you took them in.

Katie, thanks so much for showing how you made them! I knew when you first gave us a glimpse of them the other day that I wa gonna have to give it a whirl. Now here's my question....how many of those tiny wicks did your burn up in the process of candling??? I burnt about half of mine! lol I am having fun though and can't wait to make more!

Wow they do look like fun to make not sure about the messy business though hahahaha!
I really think they are super!
well done!
Im still messing about with those baskets !lol

So cool Katie! I used to make hand dipped candles so I have a couple of tips for you.

If you want to make long thin tapers, put a bead or a button on the end of the wick to weight it down and keep it straight while dipping. You can cut it off later with an Exacto knife when the wax is till warm.

Also to speed up the hardening process between layers, dip into water after each dip into wax. This will keep things straighter as well.

The wax crayons is a brilliant idea. Since you need hardly any wax you have lots of color choices that way!

Question. How do you melt the crayons?

Katie, awesome candles. My fav is of course the elephants. I have mini candles which burn for like 2 mins or less..how long does yours burn?