This one's for you Grandma....

Yesterday, when I came home from my youngest son's football game....I couldn't believe what I saw sitting on my front porch.....(Story to follow story about my love of Siamese cats, and how my Grandmother ties into all this) 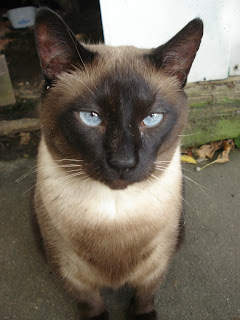 I knew at once he had to be some one's kitty...he was too darn pretty, and he's huge!!! I happened to be starving so I ran inside, grabbed a couple slices of turkey, and headed back out side to talk to him. 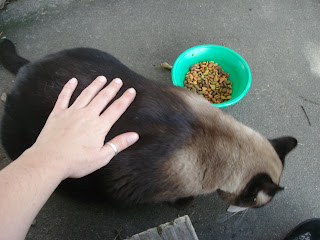 So we sat and talked, ate the turkey....and seeing how friendly he was..... 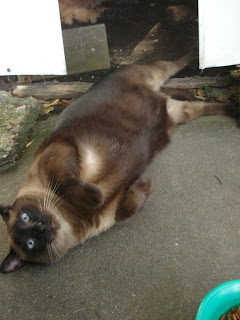 ...I knew someone had to be missing him! So I talked with some neighbors at my end of the road...and no one knew where he lived......Then I went down to the other end of the road...and the other 'cat lady' was sitting on her porch. And, immediately she knew who I was talking about! Two doors down from her, and I was knocking on the right door. The gentlemen that came out was so excited to know that I had had spotted their kitty, Caesar....and explained to me that they had left the window open the night before, and when they over slept and he didn't get his breakfast on time, he pushed the screen out of the window...and ran away. Now I knew from talking to the kitty that he had never been outside. His coat was soooo shiny, and the trees were scaring the crap out of him.
So the guy came down and tried to call Caesar, but Caesar would not come. Then Caesar's Momma came down and tried to hoax him out from under my trailer, and he still wouldn't come. 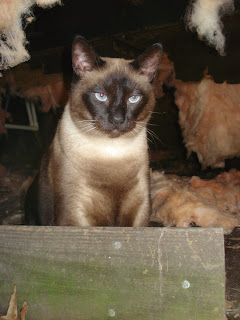 Let me tell you now, it was a long afternoon. She waited, and waited......and still he wouldn't come to her. Then we tried to climb under the trailer and chase him out....and that didn't work either, and instead made the kitty very angry. After hours of trying, we all decided to give him a break, and go back at it in a few hours......But, he still wouldn't come. I ended up falling asleep last night, and sometime during the night, my other neighbor happened to see him, and got him to go in his kennel! :) .........So when I got up this morning, I was able to call Caesar's Mom with the good news that her kitty was safe!!!! .......he has since been picked up and now is at home:)
....And now for the other story.....
My Grandmother past away Thursday evening, and I was unable to make it out there. I really don't feel like reliving the whole thing, so I'm going to skip right through it, ok. I will say she went in peace, and all of her Children were there with her. .......So, A long time ago......My Mom brought this cat home from work. He was some one's pet, who had tried to kill the families prize parrot, and the owners were going to have him put to sleep. My Mom talked them into giving her the cat, and planned on taking him to California, so he could go live with my Grandmother. LOL, Her first mistake was bringing him home! As soon as I saw him I feel in love! And he was mine! Ebenezer never did make it out to Ca......and shared a long, happy life with me and my family. Lots of fun stories there.....but I'm only going to share a few! I used to dress him up and take him for strolls around the lake in my pram when I was younger.....and when I started high school, my cat literally walked me to school everyday, and was sitting at the back gate when I came out of school....So as you can see.........I have a special place in my heart for Siamese cats!
So when I saw this Beautiful kitty yesterday, I got excited! And I was even more happy this morning when I called his parents to tell them that Caesar was OK!!! It was an amazing end to one of the hardest weeks I've gone through!
Posted by Katie at 5:29 AM

So sorry to hear about your grandma, but she knew you and her had a special relationship and that you were thinking of her. Funny how the Siamese cat showed up... now... a comforting sign for you? It's hard but treasure the wonderful memories the two of you had. Chris

You really are a cat lady aren't you Katie.
Sorry to hear about your Grandma. I hope things are a little better for you this week.
Mercedes

Katie- I was hoping so hard that you would get to see your grandma- perhaps the kitty showing up is a sign that your grandma wanted to tell you good-bye. So glad you were able to get him home safe. My heart goes out to you and your Mom and your family.

Katie, I am so sorry that you didn't get to see your grandma. I would like to think that what Kim said was true. Your grandma sent the Siamese to see you through some of it and keep your mind occupied. I hope things get better for you day by day.

I used to own a cat with the colours of this Siamese but I think it wasn't a pure bred. I have also just painted a set of cats and 2 of them are Siamese and I really love their colours. Siamese are my favourite. Like Casey, I think your grandma sent her to you to tell you everything's gonna be alright in the end.

I am sorry for your family's loss, hugs to you Katie.