A School Project in Miniature....

Friday, Cora came home with a project to do for school. She had to choose a group of Indians, and then build one of their houses. She chose the Iroquois Indians.....who lived in New York......and lived in long houses. The whole family got involved in the project.....And as usual the inspector was close by! 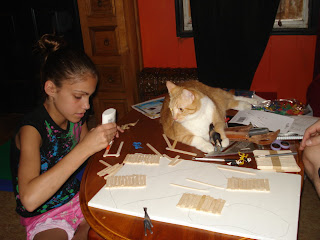 Although, he did object to the horses. You see the horses were not native to the Americas....it was the colonist that brought them over here. So, No horses went into her project. 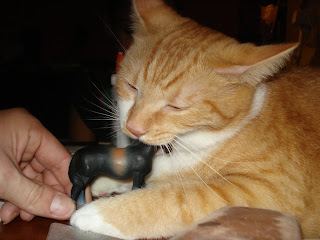 Cora and BF spent most of the day Saturday building the frame for the house. And I spent the day digging through my stuff finding things as they needed them.....glue, paint, trees...... 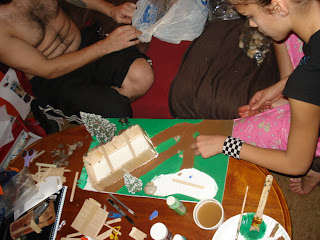 Originally she wanted to do a garden, you can see where it was going to go in the front right corner. In a minute I will explain what we did differently. She also has a pond for fishing. 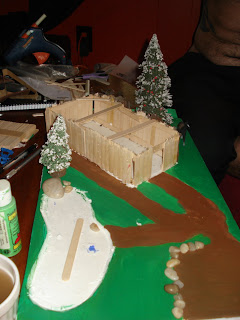 And this is what we ended up with. The long houses were originally covered in elm bark, so we found a big fallen log, and I used a flat-head screw driver to get all of it's bark of. (The branch/log itself it is still sitting on the porch, I hoping to get the bf to cut some table bases for me with it?!) 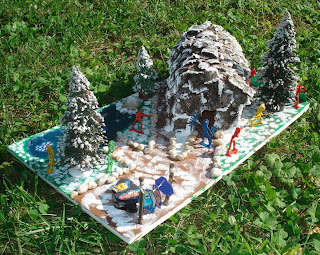 So we used that area to make a place where they could cook those fish they were catching......(Yes, it's ok to laugh at the fish, We did!!! LOL) The cooking table it stacked up slate with a fire underneath. There's also a fire inside the house, but you can't see it now that it's covered in bark. 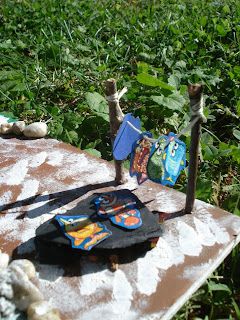 We even glued plastic Indians all over the place. I must admit, it was a fun project to do.....but gluing all that bark was pretty darn boring!!! But, see....we even covered the house with snow....how cool is that????

Hopefully her Teacher likes it too!!
Posted by Katie at 2:49 PM

The lodge house looks great! I bet they had a good time building that!

What a great project-- it turned out wonderful! Love the snow!
Hugs,
Jill

Tell Cora that she is doing a great job! Love the diorama. Otis has the right idea. If it doesn't belong in the scene, bite its little head off! LOL

Wow! I"m sure that will be an A+ project! Bet it was fun to do too!

I added you to the list of the awards that I am passing on. Please come and get it.

Cora is one very lucky girl to have YOU for a mother!
What a fun project, I'm here tonight trying to get Noah motivated to do geometry homework...now that's not much fun at all!!
Mercedes

This must be one of the advantages of having a creative mother! It looks great and Otis sure knows how to get involved in family projects!

Its wonderful! I can't wait to see if her teached liked it too.

Fantastic! I love doing projects like this and looks like you all had great fun!
I bet the teacher was impressed.

OH! BTW! Cora got an A on her project....and her teacher asked to keep the project so she could display it!! :) How cool is that!!