Before dropping Cora off at camp, We took a tour at the West Virginia Penitentiary. 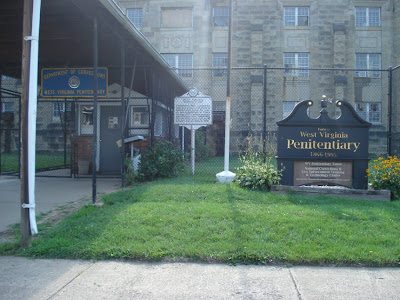 Actually, we we're there about 2 hours before the first tour....My misjudgement on time.....However, it gave us an opportunity to walk around outside and get some pictures. This place is HUGE! When we first pulled around the corner, my jaw fell open, and immediately I was in love! The sheer size of it took my breath away. 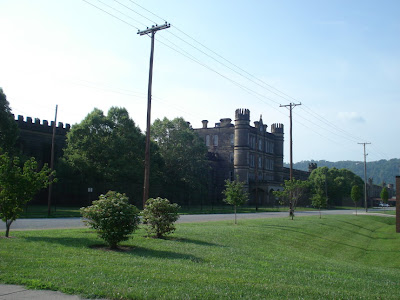 Walking around, I was able to get a few shots of the outside. This is the front door, where guards came into work. **If anyone out there is reading this that knows more than I do, feel free to correct me at anytime if I'm wrong:) 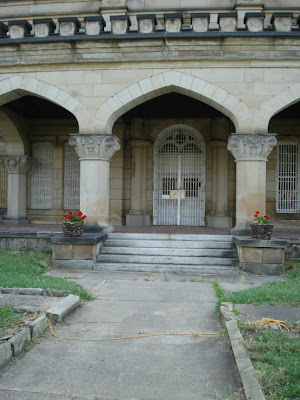 I love the vines growing up the side. And when looking for history about this place, I saw some early pictures, and from the looks of things, almost all of the outside was covered in vines at one point. 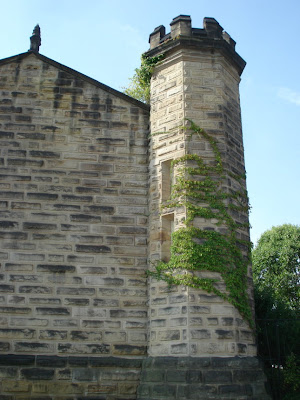 A door to the stairs of the turret: 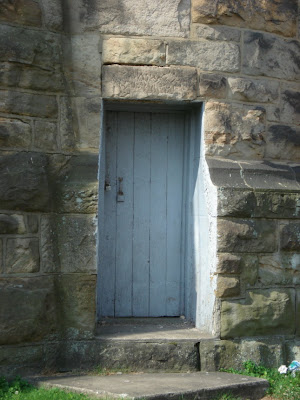 Looking closer, I wonder if someone painted the lock and handle blue too?? Love the texture on this door! 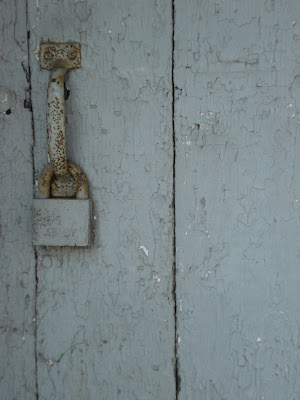 The gate where prisoners were brought in...... 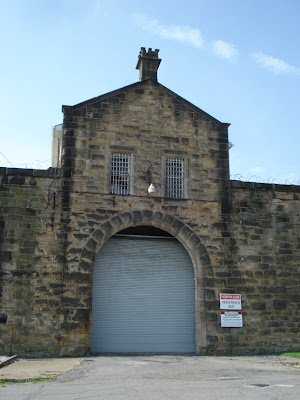 The wall around the penitentiary...... 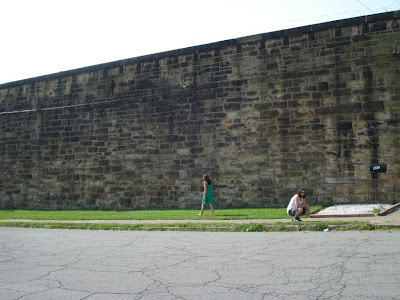 The bf wondered how hard it would of been to climb the wall, so he gave it a try..... And well...Yup! That's about as far as he got, lol. 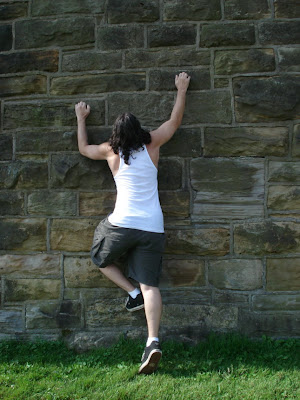 An outside pic just showing its age. 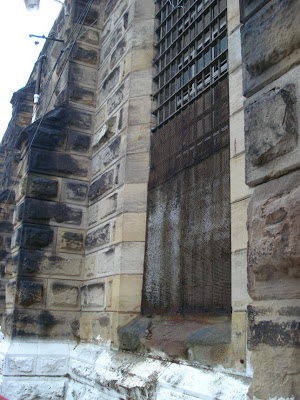 Next is outside in the yard... 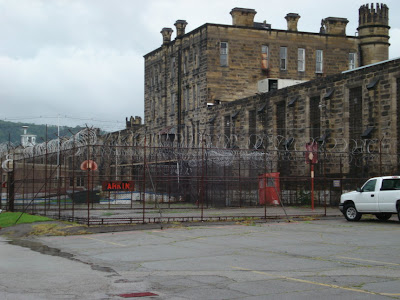 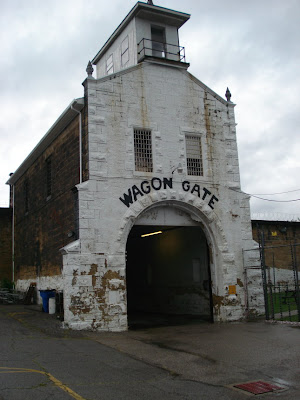 Going back inside.....I fell in love with the colors and the texture of the walls in here! So much character!
If these walls could talk, huh?? 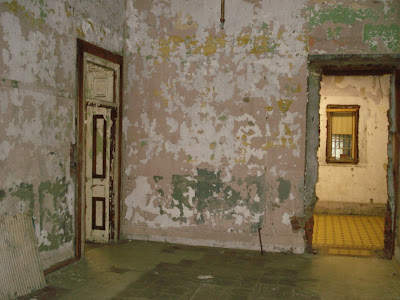 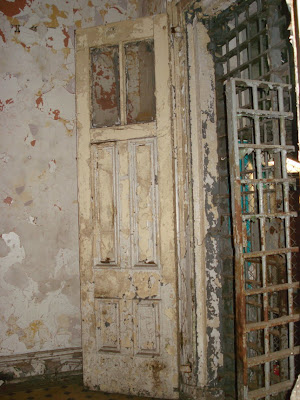 But I love the peeling paint, and rusty doors..... 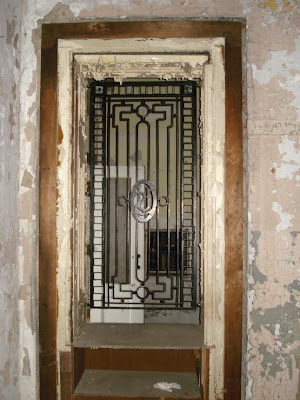 And all that stone. FYI: Most of this place was originally built by the prisoners......Using rocks from the rock quarry.... in 1886

Loved this pic I got outside, in the yard again....probably one of my favorites..... It's that pink door, I love how much it stands out from the rest of the building! 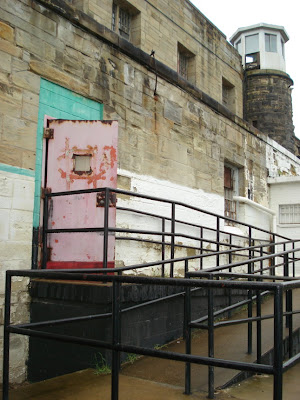 While outside I happened to spot a bird's nest up under this area we were standing in. There was a lady on the tour with us, that told me she collected bird nests, and even tried to get her hubby to grab it for her. Cute, huh!! 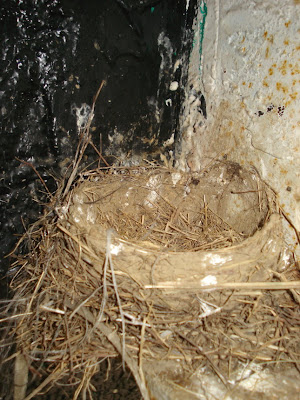 Back inside we visited where the general population lived......the cream area at the bottom of the pic is where they took showers... 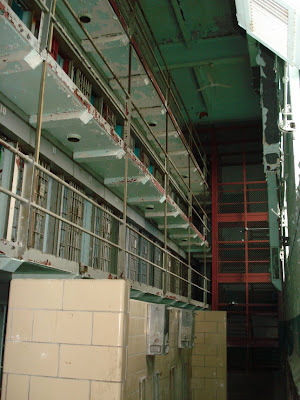 On the tour, they lock you up, and my dear Daughter was NOT impressed. The tour guide/ex-guard....played a trick on her, and acted like her door was broke, and she couldn't get out....The look on her face says it all. 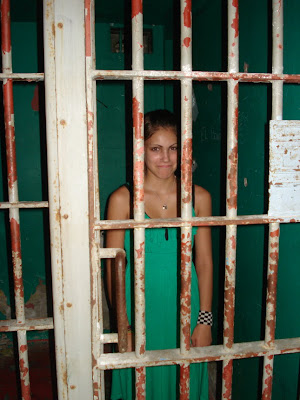 And to make sure your daughter never comes back....lol, the last part of the tour is a room where you see 'Old Sparky'. Did you know that an inmate built this thing, and after doing so was put in protective custody, due to the fact that the other inmates wanted to kill him. Crazy, crazy world we live in. 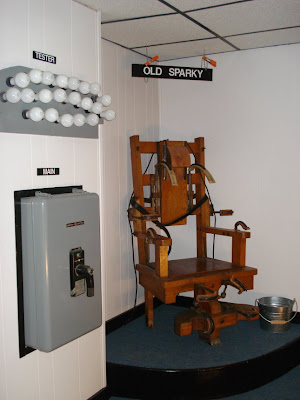 Hope you enjoyed the pictures....... I might be back later with a few more. ??
And Hope this year I don't get any hate mail about where I choose to go on vacation. Please. I don't feel I should have to explain to anyone why I choose to see the buildings I do. I just like old buildings, OK. It's as close as I can get to seeing a castle. So with all that being said.... I have other posts to write, and more pictures to share.....

No worries. I think old prisons can be fascinating-- any old building, actually. The more character, the better! Have you been to Alcatraz? They have a really good tour. I haven't been since they restored the warden's original garden. I'd love to see that. Most of the plants are original, or seeded by the old originals-- from what I understand. San Quintin is pretty cool looking too-- still in use. Anyway, if you get to San Francisco, be sure to go out to Alcatraz!
Hugs,
Jill

Hi Jill! I have never been to Alcatraz...But would love it!! I have read about it and watched movies with it in there, and I think It's awesome:) I agree, The wardens garden would be neat to see:) I was born in Oakland...and conceived on Angel Island ~giggling~ but haven't been back in a loooong time! One day!!!