.......Friday, My parents and I took the kids into Washington DC. My parents live 15 minutes away, and yet, we hardly ever make it into the city. Too much walking, and Too many people. But....Friday was awesome!!! My Mom and I dropped Grandpa and the kids off in front of one of the Smithsonian's......and we went to park the car.....30 minutes later, we found somewhere to park, and called Grandpa to see where he was.....He'd already taken the kids through 2 museums.....I think it was one of those "Speed walking" tours, lol. Any one who's been to DC knows that one could spend a whole day in Just One of the museums!! LOL

Here's a few pictures I took while walking to find the kiddos...
I LOVE the faces on the side of the building.......If I ever build a mini castle , I definitely want a few of them! 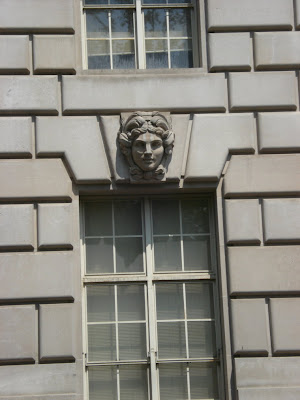 The detail was just amazing! Actually all the architecture in DC is amazing. I really could just spend the day there talking picture of the buildings themselves!!! 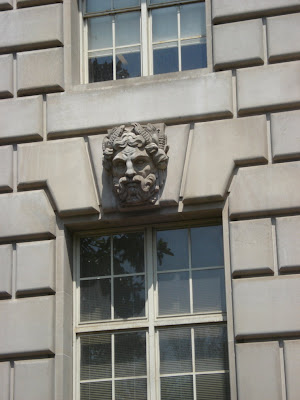 Mom and I had to walk though the
National Museum of American History to get to the side were the kids were, and only really saw one Exhibit..... Julia Child's Kitchen. 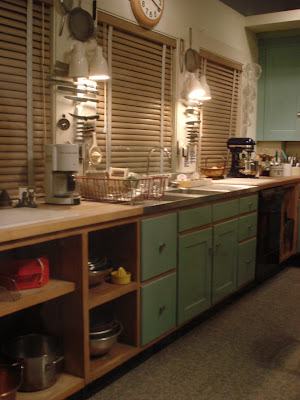 The whole kitchen is on display! Sorry the next picture is a little blurry~ the exhibit itself is encased in glass...... Wouldn't this be fun to do in mini??? Loving her peg board! And her colors! 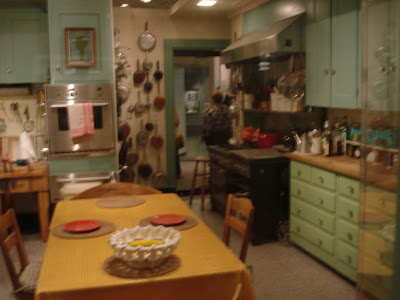 Out the front door, and we were off to find Grandpa and the kids. On the way, I stopped to take a few pictures of the Smithsonian Castle. 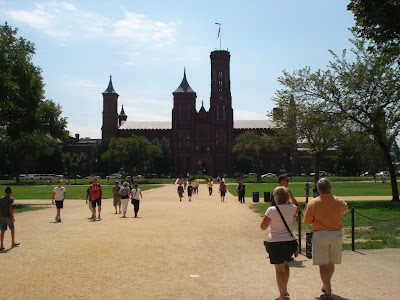 It wasn't until after I got home and put these pictures in photoshop that I realized my kids and Grandpa walked right by me while I was taking these pictures.....LOL....Look in the first picture, that kid all the way to the left is my youngest.....And in the picture below~ Grandpa is the one with the Waldo shirt on~ Too funny, HUH! Walked right by their own Momma!! ((By the way, we didn't lose my oldest son, he stayed here at the beach and spent the week with his other Grandma)) 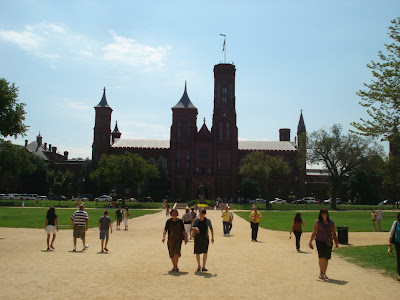 Once we caught up with Grandpa, I realized that I was getting a year's worth of walking down in one hour! I swear he was trying to keep up with the Segway tours!! I did manage to get a couple of pictures of plants as we ran by the gardens at the Castle~ Not too sure what these were, but they were pretty! And little! 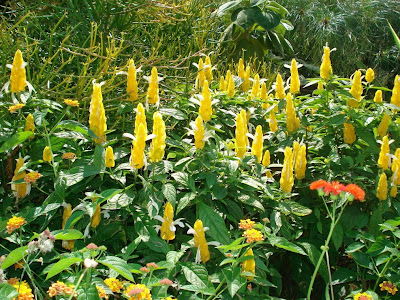 And this big leafy plant had spikes on it!! 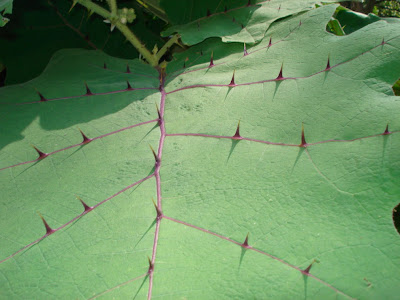 We walked to the other end of the 'Mall', but when Grandpa saw the line at the Air and Space Museum was wrapped around the building, he talked the kids into a carousel ride, instead. I'm not saying they didn't enjoy it, but there was that moment when I realized my babies aren't babies No more:( 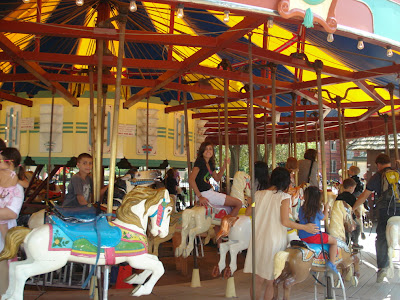 Next, Grandpa...Yes, I'm using his name a lot...but He was our tour guide:)
LOL
Grandpa decided that we needed to see the Lincoln Memorial next. If you look in the picture below....You can see it over that hill, behind 'the big pointy thing' (as my youngest called it)....LOL Yup!! It was a hell of a hike!! 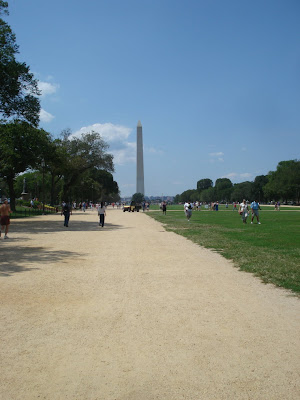 But I tell you what...It was the stairs to the Memorial that kicked my heart's butt! I lived to tell 'bout it and all, and it wasn't traumatic or anything, Just wore me out! LOL..... 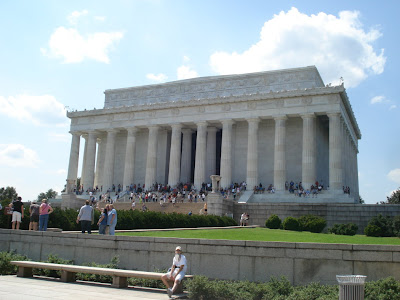 But seeing that big ole Abe Lincoln statue was worth it! 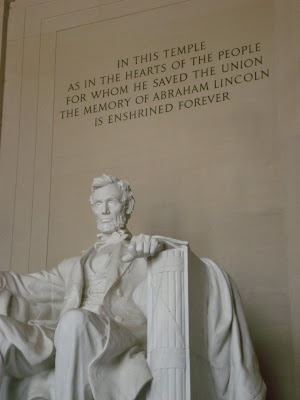 After Lincoln, we left DC. On the way out, we got the 'windshield' tour...... Grandpa knows what everything is!! We went over to the The National Harbor for dinner, and then a little bit of shopping. The Harbor is a very 'Posh' shopping area, with art work everywhere! It would be such a inspirational place to live:) Oh, And Disney just bought a big chunk of land right next to it to build a resort!! Can't wait to see what they do! 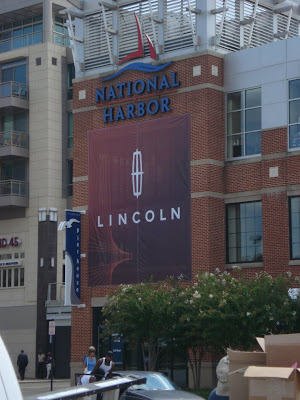 Look at this awesome picture of the kids! I love it when they pretend to like each other so I can get that 'perfect' picture:) 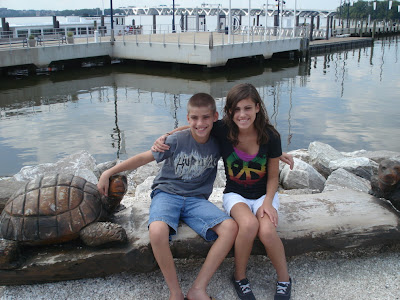 Then there's this guy, coming out of the sand....The kids were able to go down and play on it after dinner, but of course My batteries were dead by then....Maybe Grandma will send me the ones I took using her camera... 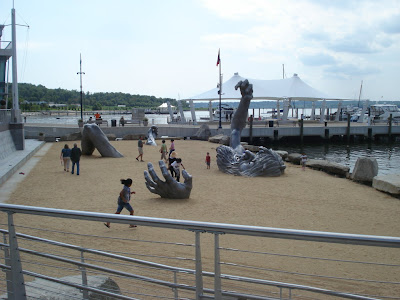 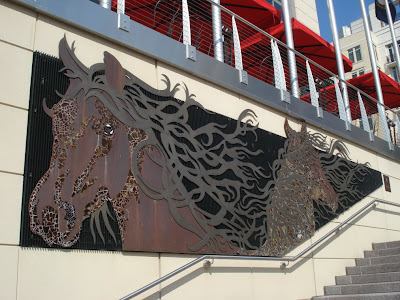 It really makes me want to do something like this on the side of the skate shop.....Maybe not horses, but Something with that iron and tile work.......Don't get my wrong! I LOVE the horses~ Just don't think Drew wants horses on the side of the shop! Isn't it beautiful though:)

I did get a few souvenirs.....Of course I'll have pictures later, I'm just waiting on my batteries to charge up now......
Until Next Time:)
Posted by Katie at 8:46 AM

Fabulous pictures Katie! I feel like I got to come along on the tour :)

Looks like such a fun trip Katie!!! I would LOVE to see Julia Child's kitchen! I love her colors too! I've been obsessed with her ever since seeing the movie Julie and Julia! Love that guy in the sand too! I want one!! -ara

Great pictures Katie. Love the Horse Metal Work and the Guy in the sand. There a few Iron Dragons around here, and when Debie came to stay she saw some iron Mermaids that she fell in love with..xxx