They Multiple!
In case you don't know the story.....This is Rufus- Not to be confused with Otis, who will get his own post later....... Rufus was a stray... I started feeding him, we buried what we thought was him here, and then one day he brought the family. It has taken me a long time to befriend all of them...But Now....There's only One outside kitty, and he's fixed! 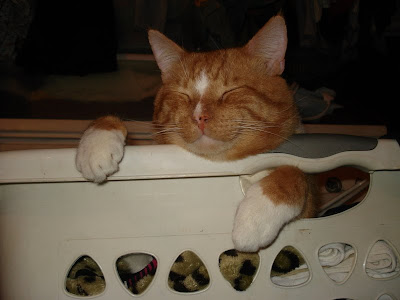 ....had a daughter named Maggie (Not to be confused with Ginger, the kitten that needed the blood transfusion).... Maggie was the last cat I brought in...... Took me months to make friends with her- she wouldn't even come up on the porch if we were out there. So I'd sit quietly next to her food bowl, and eventually she started to come up to eat... Then one I caught her. She didn't even freak out! I think she knew it was coming.... She's under my trailer in the picture....this is No place for a cat....or her kittens.... 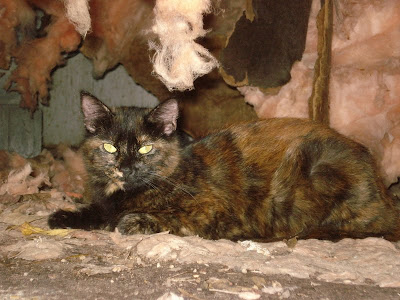 After her first litter of kittens (the litter that Wilbur came in)..... She had another litter. And at this point, I had had Enough! I love my cats, Each and everyone of them.... But this is nonsense!!! So everyone got caught!

This is her second litter of kittens..... With some of the most prettiest coats I've ever seen.... Gray bodies with black and white feet?!? 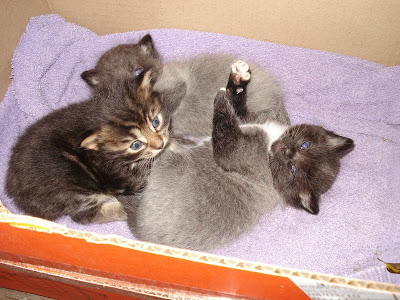 When they were brand new, the mother brought them up on the porch.... So I've been handling them from the beginning... It was almost as if she wanted my help taking care of them?! She'd bring them up, let us play with them.... Then come back when we were gone and feed them.

This is Teddy..... the bf has totally falling in love with this guy! 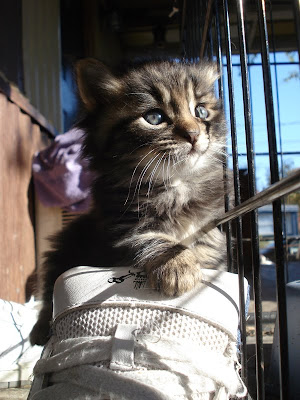 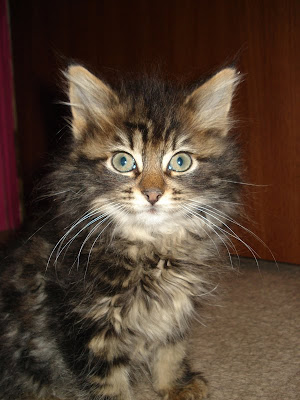 And this is his brother Bear- he stands up like a Bear, He growls like a bear...... And he's my shadow! Follows me where ever I go, wants to be right next to someone, But doesn't want you touching him, lol. 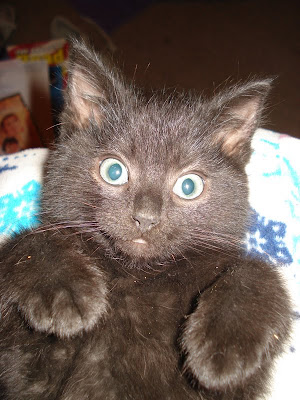 And here's Cleo again! Cleo- short for Cleopatra...... Cleo thinks she's got to be in my lap all the time..... She's so lovable, and she plays hard! When the babies are wrestling....she normally has the upper hand. 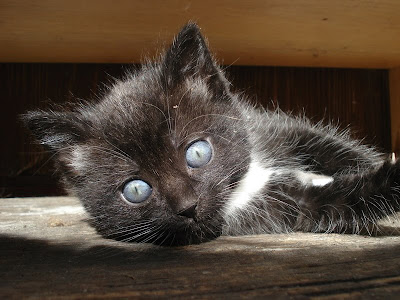 And did you notice that my once gray kittens are now black? They're the same kittens, they just changed colors on me.

The cat tree seems to be the hot commodity around here..... From back to front, there's Wilbur, Teddy, Fred and Cleo's up front in the corner...... 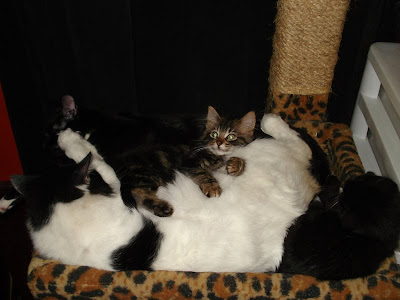 And today we have Fred again.... And then from left to right is Bear, Wilbur and Teddy. 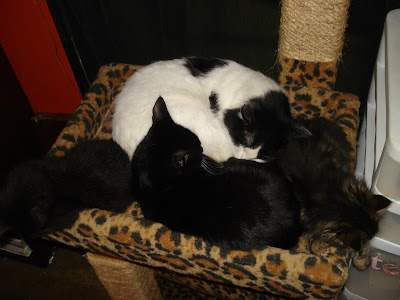 So now that I have way too many cats...... I'm exhausted! Someone is always getting into trouble...unless they're all sleeping. Don't get me wrong, If I could find homes for them, I would.... I've asked everyone I know, and I've managed to find homes for some, but I'm running out of friends. Maggie is in the bedroom, until we can get her fixed.... and she still won't let us touch her..... And the older males walk up and down the hall, churpping all day~ Very annoying!! And then there's Otis...... Who's keeps me busier than all of them put together. We'll discuss him later! So if I can find them homes, I will. And until then, I'm going to keep praying that I don't ship one outta here in one of the Etsy orders... They LOVE the boxes I bring home, and the tape... and the bubble wrap. I have to hide from them when I'm packing orders! LOL.... One day... One day I'll find homes for these guys and my life will go back to normal, LMAO.... Yeah Right?! What is normal anyways?? Ha haha

Ok...One more pic before I go..... This is Emma, Cora's kitty that lives at her Dad's house. I took it on Halloween, Cora had dressed her up for Cameron's birthday party.... Here she is sitting in the window watching the kids play outside..... So cute! 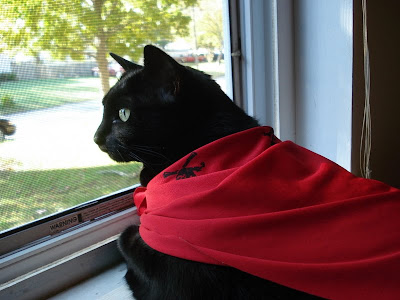 Katie- they are all so cute! I wish I could take some of them for you- hubby says absolutely no more for me :( I think I might be in love with Bear- although I still hold a special place in my heart for Otis :)