It's been One Hell of a Morning!!!

Oh my....where do I start? I woke up this morning to a 'knocking' noise, and was wondering What in the world Otis was doing......However, when I got up, he just sitting on the coffee table, looking at me as if to say....'What?' So I went back to bed, and the next thing I hear is the bf coming back home? Before I knew it, he was at the foot of the bed...........and told me he had some bad news. Poor fella was crying so hard he could barely talk.

His boss had picked him up as usual, and on their way out of the neighborhood, he had found Rufus (The orange stray)......and he had been hit by a car. He said he brought him home to bury him, and wanted to know if I wanted to come outside and say goodbye. (That knocking noise I had been hearing was the bf digging a hole next to where Lucifer is buried) I chose not to go outside immediately......it was just too much for me to handle right now.....but I soon went outside to comfort the bf.

Now.....flashing back almost 3 years ago to the day, the bf lost his dear 'Lucy'. And it all happened the same way it had this morning. Lucifer (which btw was the cats name in Cinderella) was the bf's pride and joy, and it really took a lot out of us when we lost him. And here was the bf was reliving that morning. To know the bf, you would know him to be a Very Strong Man....but these kitties really have stolen his heart!
After we got him buried, we came back in and was trying to decide whether or not to tell the kids. My oldest son graduated Elementary school the day Lucy died....and tomorrow is Drew's last day of Middle School. He had already made a comment to me the other day, about how he hopes nothing bad happens like it did that day 3 years ago....and then this happened this morning........And Well.........I just didn't have the heart to tell him.
So, at this point, me and the bf are in the master bedroom.....trying to make sense of things, when I heard Drew yell for me. So I come out to the living room, and I hear Drew say "Rufus is here for breakfast!!" HUH, WHAT?!?!?!
Sure enough......there was Rufus! Meowing because he had missed his breakfast! I had to yell for the bf to come here......Poor Guy, took one look out the door, and you woulda thought he had just seen a ghost....I think he was in shock! He didn't even say anything.....he just went back in. The whole thing just took him some where he didn't want to go......
He eventually came back out, and we all sat on the porch and watched Rufus eat his breakfast! Then it dawned on us.......We have some poor families' cat buried in our backyard now! Of course at this point, we had a good case of the giggles....and the bf said "At least he got a good burial!!" 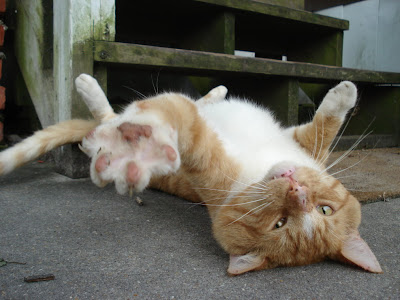 Here's a pic I took this morning, after Rufus ate.......I happened to catch him as he was rolling over and stretching, and it was too cute of a picture not to share. Although now that I look at it, him being on his back might not be all that 'cute' right now. It's almost morbid!!
So Glad to have you back, Buddy!!!
Posted by Katie at 5:59 AM

wow - what a story. I am so sorry to hear what happened to the other cat but glad to hear that Rufus is alright! Its bitter sweet I guess. Great pic! -ara

Katie, I had the exact same thing happen with one of the stray kittens that we had in our back yard years ago. I saw the body at the end of our street and went out with a box and collected it. I was crying throughout. I burried the baby. Later that day, the mother cat came in with all four of her babies. To this day I have no idea who's kitten I burried. The poor people that really owned that one never knew what happened to theirs. I love the photo of Rufus. Glad your still around Ruf! Take care and don't go out in the street!

What a story! A what way to start out the morning! So glad Rufus is fine (although he's cheeky for lying belly-up like that)!

It's nice how you guys give your pets a proper burial and final resting place. This is a little morbid but I gotta share it: when my pet hamster does pass away, my mom said that she'll bury him beneath one of her fruit trees...as fertilizer! And then we'll have good fruit. How sad is that!!!

Talk about a roller coaster of a day! I'm glad that Rufus is ok. It's always the big guys that cry. It just shows the world what we already know about them.

what a heartbreaking experience and what a shock! yeah it is funny after a while -- or you have a ghost cat? glad you didn't repeat your 'bad luck.'

Katie,
I actually had tears in my eyes and had to pause before I could read on. Imagine my surprise at a somewhat happy ending! I am soooo glad that Rufus is ok, and glad that the other kitty had such a loving burial. Your bf is a keeper- any man that cries over an animal that he loves has the best heart you can have. A big hug to your whole family on this rollercoaster day!!!

lots of emotions, for just one morning! I´m glad nothing happened to Rufus, I can´t imagine how your son would be if this was really happened
hugs
Ana

Yikes, that was a bit scary. Glad to see he's ok!

I have agree with the BF, at least the poor soul got a proper burial.

So glad to hear that Rufus is safe and well. What an experience you both had. I hope you find out who's cat you buried.
So glad to hear a Happy ending..xxx

I was almost in tears too! Someone needs to make a movie of your story, too funny!
Mercedes