I don't think I've ever told you the story behind Otis and how he came to be....

A long, long time ago.....we got a kitten from a family friend.........I'll never forget the day we picked him up...the bf's friend told him if he had any problems with him...We could bring him back. We thought that was a little odd...but took him home anyways. We had always wanted an orange cat! So we brought the monster home....and the bf named him Lucifer. He was the bf's cat...but I loved him, too! But, OMG...was he the little devil! He stole a chicken wing out of my pot on the stove one time, and once it was a chicken leg right out of the KFC bucket. LOL, he hid under the bed with it, and the bf had to fight him to get it away from him, lol...he was about the same size as the chicken leg at the time too...it was rather funny watching this grown man fighing this little fur ball over a chicken leg!!! He was a mean, naughty cat, but we loved him. 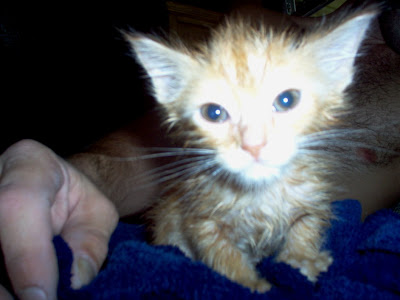 When he was almost 2...he started getting out. He'd stay gone for days, then come home and sleep for days. He often teased him that he must of had a girlfriend or something that was keeping him out. Shorty after that we lost Lucy......and it really took it's toll on the bf. I've never seen a man that upset over anything! 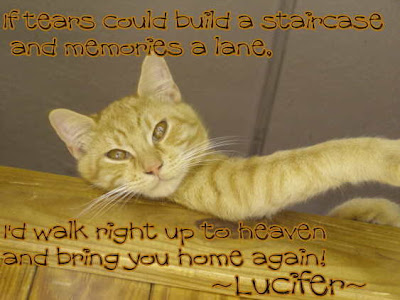 Then not to long after that....another friend came over one night with these two orange kittens....I actually heard them coming down the street cause these cats were screaming for their Momma!!! When the friend brought them in, the bf didn't really want much to do with him....but I feel in love right away!! *I was only aloud to keep one, and the friend disappeared into the night with the other kitten- and told us later that he gave it to someone in the neighborhood. Anyways the Bf named him Otis after a character from The Devil's Rejects~ one of our favorite movies.......and soon after he feel in love too!!! Otis is a brat, but I don't think I could live with out him. He's sitting in timeout right now, because he won't stay off the kitchen counter....and my oldest is trying to wash dishes, and that cat wants to lie on them~ Gross if you ask me!! And today, that ^$%^(% climbed into the cabinet again, but this time he pushed a bunch of dishes out of the cabinet and broke the crock-pot my Mom just gave me at Easter! Yes, he is a menace!!! But at night when I lay down to sleep....You can here him running down the hall, and he jumps up into bed and lies in my arms like a baby and gives me kisses.....so how can I not love him!! He often reminds me of the story of the dog Marley! He just got stuck in a cats body!!

We have often wondered if Otis was Lucy's offspring. They both have the same markings, and they both hump~ yes! Like a dog humps! Lucy liked socks, and Otis prefers a furry blanket. I find it very, very strange! LMAO.... I've never had humping cats before...And Otis is fixed?! 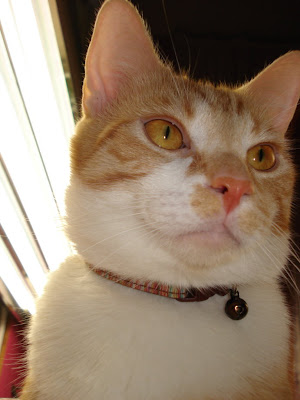 And here's where it gets tricky....This is Rufus (Another character from the Devil's Rejects)....and he is a stray. He started coming around about a week ago and as soon as I saw him, I just got that feeling that this could be Otis's brother.....He's the same size as Otis, just skinny. He has those paisley things on his cheeks like Otis does, and Lucy did...He has Otis' four little white feet.....and he's a talker, too. And super friendly! I just can't help myself......I had to feed him. So now, every evening, Rufus (The kids named him that this past weekend) comes to eat dinner......*And no, the kids haven't watched the movie, but they know about it, and the bf told them that Rufus was another character and they liked the name....It was either that or Capt. Spaulding...and well we just liked the sound of Rufus better, lol! 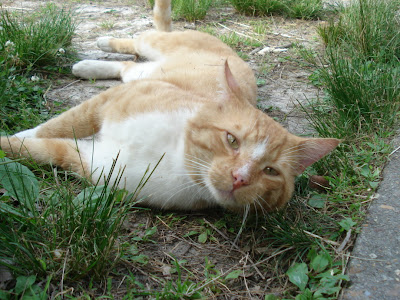 And tonight he let my oldest~ Drew, sit with him. Aren't they so cute! He eats, then go into the dirt and has a good roll around, Every night! 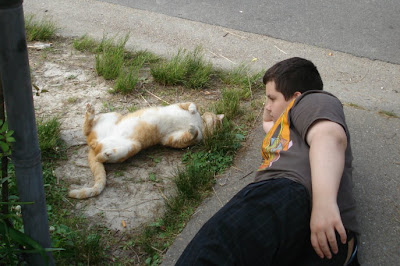 However....Poor, Poor D is not happy about this arrangement. He says this is His block and no other cats are suppose to be here.....He's still trying to chase Rufus off, but I bring him inside and give him special treats when Rufus shows up. LOL...He's still mad though....Look~ He won't even look at me, lol!!! 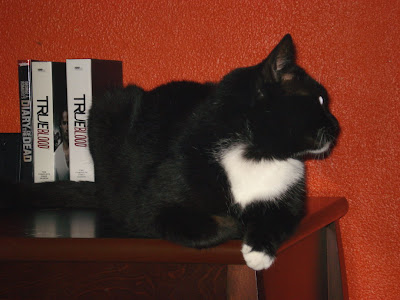 LOL...Like the color of my living room walls! It's called China Town Orange, And we love it!! hehehe...can you tell that the bf likes zombie and vampire movies~ or at least that's what we've been watching this week......lol.
OK~ Mercedes! I'm waiting for glue to dry right now as we speak.....and all I have to do is make a cover.....All my pictures are loaded up, just need to write this out now. I made sure to take lots of pictures! I promise I will have it done in the morning!
Oh and I finally made it to the post office!! And the grocery store!! And got some joint compound!! And TP!! WOO-WHO! I'm on a roll today! Just have to get some more marshmallowing done, and I feel like I did something great today:)
Posted by Katie at 3:37 PM

I loved hearing Otis' story. I have a big orange cat that talks too. I have a boy and two girls and my boy cat always comes to tell me when the girls are naughty- isn't that funny! He's a tattle tale! Otis is lucky you love him so much.