I told myself if it was the last darn thing I did today....I was finishing those Marshmallows!!! Honestly, I'm sick of looking at them, and bored. LOL.....it doesn't take much, Haha!
Haven't seen the strays today?? Casey.....if I do catch them, I planned on taking them to the humane society...I know I can't have any more...I just want to be able to have good homes, too....And that doesn't mean living under my house!!! Hahaha....Oh...and one day I will come back and share our opossum stories....Haha!! I tell ya, if it's not one thing it's another!!
OK...so on to the house!
Yesterday....I did a little marshmallowing.......glued on the window frames....... 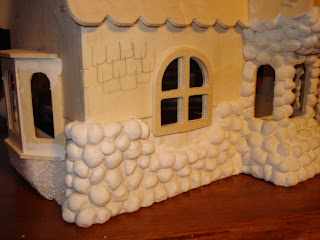 And I got the Styrofoam glued in under the bay window. 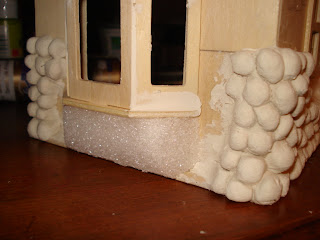 And after I got bored with that....I did a little rock work under the window seat. I realized my seat it is a little crocked, and it bothers me...but I'm going to try and look past that! LOL...I'd like to do some more stone work in here, but have just ran out of paperclay, again!!! 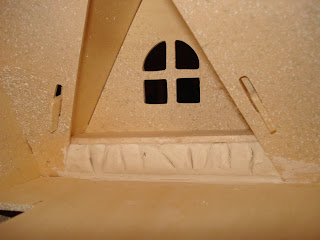 Then, before I went to bed last night, I put 2 coats of light green paint in Cora's sitting room. I also glued tissue paper to the wall that's laying down, and painted that. Just wanted to give it some kind of interest! Still thinking it's going to need a couple more coats, but I really like the color. 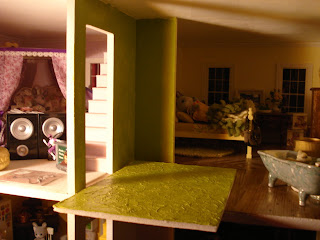 And today..........Marshmallow Manor got off to a rough start...My oldest poured his whole bowl of cereal into the house, and I 'bout died!! So, now that the house has had a milk bath and dried....I can get on with finishing it!!! Kids!!! 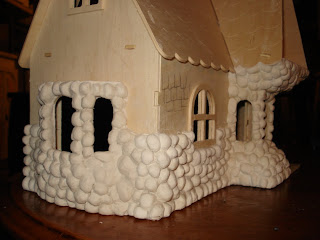 If you can't tell......I'm DONE with the marshmallows!!!! Not sure what I'm doing next, but I just wanted to show ya'll that the house is getting a little closer to be done!! 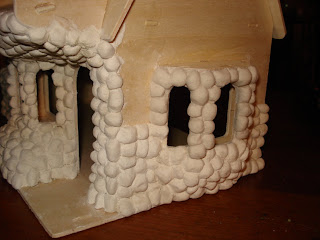 I have never seen "marshmellowing" done before! With using food aren't you a little hesitate? What are you doing to preserve it?