I know, you're probably tired of hearing about the cats......but this is good. So remember I told you a few posts before about the stray that's been coming around.......If you missed it, go back and read the post http://katiesclaycorner.blogspot.com/2009/05/i-just-cant-say-no.html , it's long~ but it's a good read! Anyways...When Rufus first started coming around....he had a little gray and white kitty that followed. (This is as close as she will get to me) 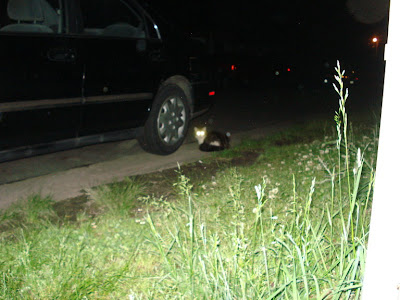 Rufus comes right up to you, and acts like he's known me for a million years, but this little gray kitty has always kept her distance. She was there for a while...then we didn't see her. LOL....Yes, I now know she's a girl...........

So, yesterday morning, I awoke to a horrible cat fight outside the bedroom window! I got up to go see what in the world was going on, and as I was walking out the bf was coming in (he had to come back by the house before he went to his job)......He was laughing, and talking about how the gray and white kitty was back and chasing some brown cat down the street. Then he said he wouldn't be surprised to see if she had kittens under there that she was protecting...LOL, and I didn't believe him!! Not until I put some food out and went back in the house to spy.........A minute later the gray and white kitty comes out from under the house...then not a minute later and out comes a black and white kitten!!! It's not a baby, baby...looks like it's probably 2 months old or so. ........and then out popped a little brown/tiger striped one! I couldn't believe it! Rufus has brought his family to live under my house! Yikes! And the funny thing is, is he's not even the daddy....I know this because the kittens look just like the brown cat that the momma was chasing earlier that morning...and I know that cause I spent the better part of the afternoon, with my head under the trailer.....watching the kitties sit and stare at me. There's 5 of them under there. And I think Rufus is the alfa kitty. (Well, the momma seems to be the true alfa, huh...lol) I gotta Kitty Party going on under the house(trailer), and I wasn't even invited, How rude! LOL.....

So...now the bf is mad at me cause I'm feeding them. HELLO~ there's babies under there, I can't just ignore it when I'm the one that has to sit in the house all day, and I know they are there!! He's also afraid that the momma cat is going to run off our cats. She did chase JD out from under the trailer yesterday, and it was rather funny. I think D has finally met his match with her. He's normally the one running everyone off!
OK...Now how do I get them out?? I can't just leave them under there.....the bf told me to stop feeding them and they'll just go away, and well..... we know that's not going to happen....so.......I gotta figure out how to catch them! Yeah Right! Bah hahahaha
Posted by Katie at 5:42 AM

I have never caught a cat before but we did have a opossum under our deck and we caught it. Some feed stores rent out humane traps that just close a door whenever an animal walk in (they arent too expensive either). We caught the opossum like the first day we used it and then we called someone to take him away (I won't hurt animals ... just can't no matter what it is). So cats might be smarter than opossums but you could try leaving something really yummy for the mom in the cage and then when she's caught, carefully get the kitties out and take the family somewhere else?? Since you're home all day you would be able to watch so the kitties aren't without their momma too long. That's just my brief history of cathing critters under the house.. good luck!!

Hey Katie,
I sent you an email about what we did in this situation once- it was a pretty long story-didn't want to take up all your comments space :)
It's from flowerarts@gmail.com

Katie, I had the same thing happen years ago with a momma cat and four babies. I did tame one of them, but the rest stayed wild. The only reason I got the one was because it was a tiny kitten and accidently rolled in some cactus. I grabbed her and Walter pulled out all of the hundred or so thorns with tweezers. I was her person after that. No one else could really make friends with her ever. My point is, even if you get them out from under there, they probably won't ever be really tame. Could you get a humane trap and turn them into the humane society?I think that you should keep the bf and get someone out to retrieve the cats......:;-)

If you are going to turn them over to the humane society, you might as well call and see if they have a cage.
Keep feeding them.