I found this bed on EBay earlier......And have totally fallen in love with it!! The detail is amazing!! It's a bed for a real house, but I think I can pull inspiration from it to make Cora's mini 'Gothic' bed!! 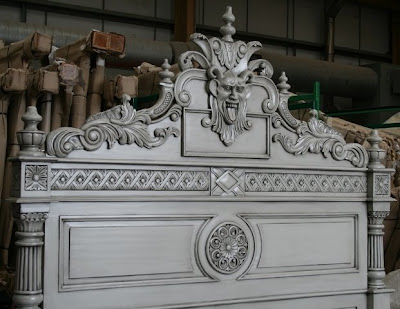 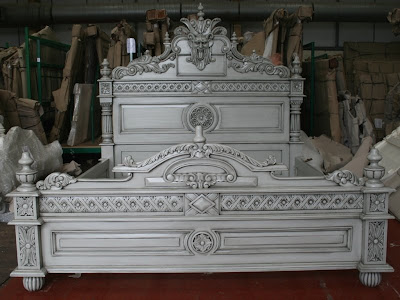 And here's another picture I found last night....Thought this would also make an interesting headboard!?! 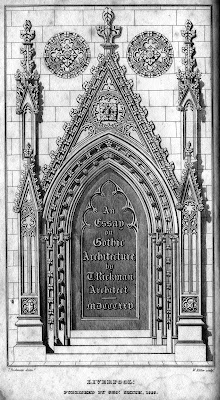 So, when it came time to lie down last night I grabbed a piece of graph paper and started sketching out what I wanted.... 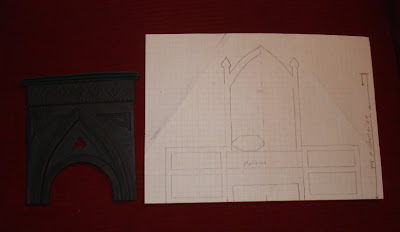 .....Then it dawned on me....I have something similar to this in Polymer clay that I had made for a door frame for a haunted house. I never did make the house, and now I have these 'stone' pieces laying about....But they're great inspiration for me to go off of. I'd use this piece, but...it's too big! But that's Ok, at least I know I can make something close to it...... 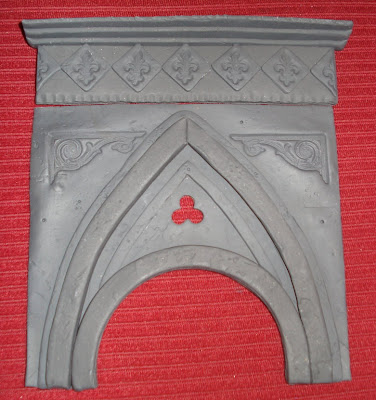 So.....I Thought ya'll might like to know what I was doing at 11pm last night...LOL.....I keep thinking, I hope none of my neighbors saw me last night or they'd think I'd lost it!! So I happened to go outside to see if any of the kitties were there, when I spotted movement across the street. And upon closer inspection, I realized it was the Momma kitty and 2 of her kittens......I was able to get some dry food, and started chucking it under this van to fed them, And Boy were they hungry....Then I made my son go get a can of wet food.....and as soon as I opened it, Rufus appeared!! LOL...So here I am, crawling down the middle of the road, in my PJs mind you...using my fingers to get small pieces of tuna out of the can so I can lure the kittens out...and with my other hand I'm trying to cover the can so Rufus couldn't eat it all. I was able to get my hands on both kittens, but they're quicker than me, and wiggled free..... These guys are totally feral......but I think If I could get them into a good home, they'd be OK. That's if I can catch them, lol.......Here's a horrible picture I took.....Haha~ You try taking a picture covered in tuna, Not easy, lol!!.....But you can see the little black one on the left and on the right is Momma and right behind/under her is the black, orange and white kitten......One thing I can say for sure is they were Well fed last night! Bet they went home and slept all night! Not to sure where her other 3 kittens were....hopefully they'll turn up again soon! 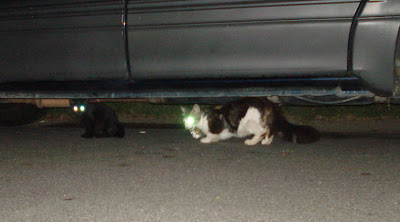 Well...I'm not to sure how much mini'ing I'm going to get done this week...I have to start getting the kids ready for camp....and figure out which way we're going this year! I refuse to go through the middle of the mountains again.....My body does like all that up and down, and all those curves and what not.....It's beautiful! But I can't do it this year!! The drive itself is already pushing it....but it's only once a year, and it's for the kids...so I don't mind! And I normally find somewhere interesting to stop along the way.....makes the drive more bearable if you break it in half and get out and walk around!!!

Katie, if you go to my posts on our haunted house at the start of our blog, theres a photo of our gothic medusa style bedroom, and for that we bought a wonderful bedroom kit made by 'Realife'. It is American, it cost me a fortune to ship in to the UK from ebay but I love it!! the style is similar to the one you have here. I have just checked Ebay and cant see any on there at the moment but they often come up and I think it was only about $12 or so for the bed, dressing table and bedside cabinets. They come in dark wood, I sprayed mine in crackle paints. I know you love to make your own things so at least buying in Kit form it makes you feel you are still doing alot of the work! If I see one come up Ill give you a shout!! Tell Cora its a fab room! Kate xx

Go for it Katie! I love the guy with his tongue hanging out! You can do it!

I saw the cats, now wheres my friend the possum? He needs love too.LOL