Oh My.....has it really been a week since I posted?? I can't believe I let time get away like that! I'm still here.....just been 'lounging' around the house.....lol........ The kiddos will be home this weekend, and it's time to start getting them ready for camp........So, you'll have to excuse me for a little while, while I play 'Mom'! *Sigh...This summer is flying by sooo fast! At the end of the month the 2 oldest will go to a special camp for kids with asthma!! It's such an awesome place.....if You live in or around West Virginia...and have kids with asthma, Email me and I can give you the info!! Your kids will love it!! ~So......while those 2 are at camp, my youngest will be going to spend the week alone with Grandma and Grandpa!! They were talking about checking out a museum or 2.....they live right outside Washington DC! And my youngest is sooooo freakin smart, he scares me sometimes. LOL.....Have you watched the movie Knowing, with Nicholas Cage??? My youngest would be the boy in the end....I tease him all the time about how the aliens brought him to me one night!! And how one day, they're going to want him back to head some super mission or something, lol......and he laughs, and says 'Aweee, Mom!' ....and I say, 'It's true:)' .........Bah hahahaa.......

OK....So it's time for some pictures!! I've been working on the wall in Cora's house that separates the sitting room and the bathroom. First I used a piece of foam board, but once I put a layer of paint on it, it started to curve and wouldn't stand straight up anymore.....So after a Lot of thought.....I think I finally came up with a solution! Lego's!! LOL, Yes a Lego wall! Well, actually there's not a single Lego in that whole wall...they're all the generic brand, but they worked perfectly. LOL, Oh my.....it was such a chore getting my oldest to dig through his big ole box of Legos for the Non-lego ones, hehehe. But I really appreciated it:) OK...So I built the wall.....covered one side with tissue paper and Mod Podge, then painted it green. And on the other side......I first covered it with a layer of Mod Podge~ to act as a sealer...then I began gluing on the tiles. I used the E6000 glue and it worked perfectly! Now I just need to grout it. Anyone out the there ever grout polymer clay??? I'd love to hear any tips!!! :) 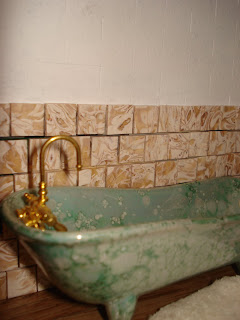 I think it looks pretty good. I want to add a chair rail above the tiles.......And A piece of trim at the top....Oh~ and those 2 holes at the top of the wall are going to be for my shower curtain rod....once I figure out how to make it:) 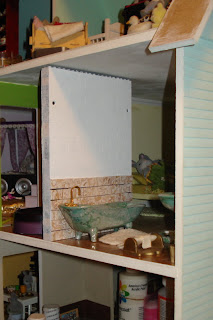 Still need a couple more layers of paint here and there, but I think I'm getting some where?! 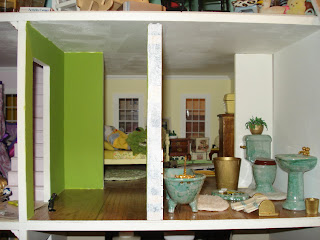 Here is he sharing one of my secrets with you.....I use an emery board to sand most of the things that get made for the doll house.....It's easier to control then just a piece of sandpaper! (BTW.....He took it right out of my hand to chew on it....but once he tasted it he changed his mind!) 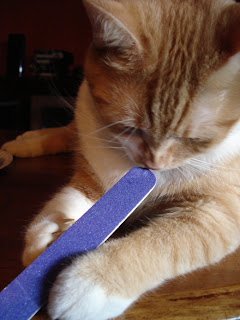 And this is one of my favorites!!! I took this the other day......and well, it pretty much sums up the way I've been feeling *blowing raspberries*.....LOL! He's sleeping, sitting straight up, with his tonuge hanging out:) 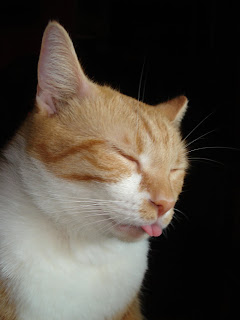 Found this guy the other day in the garden.....I've seen him weave ones that look like ladders...but never one in a spiral like this...Wonder if he's drunk?? LOL 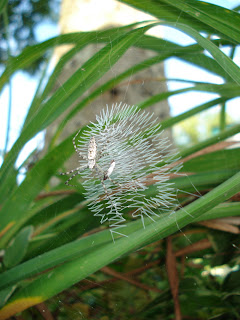 And look.......Rufus came in to hang out for a little while this morning........I swear, Otis was telling him about all the fun things he could get into around here..... 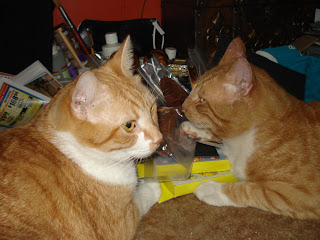 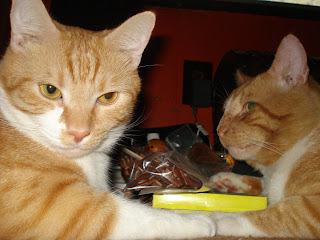 The bathroom looks great!!! I am assuming you made the tiles yourself! They are beautiful! I just love that Mr. Otis :) -ara

I think I may have erased the comment before I made it all the way through....Rufus looks to be moving in. Slowly but surely...Think of the fun you will have with the two of them...How about adding the baby opossum to the mix too. After all,you are going to be kid free and bored....ROFLOL Good Luck.

I like how your bathroom is coming together.
I think Rufus is asking Otis if this would make a good permanent home. He probably thinks that Otis has it made. But in the last picture, by the look in his eyes, it looks like Otis is saying - just don't get too comfortable.

Oh my gosh, I LOVE that picture of Otis with his tongue hanging out---so funny!!!

Have you tried mixing Gesso with cornstarch and using a syringe to squeeze it into the cracks around the tiles?

So when is Rufus going to start staying? ;-)

Those two really could be brothers!! Too bad DNA-testing is expensive hahaha
The tiles are gorgeous by the way, especially combined with the green of the tub :) I've heard something about grouting with birdsand mixed with gray acrylic paint, which has such a nice structure. You can also buy something called Beamix 373, which is a hobby kind of grout or use plaster! I think it's best to try some stuff and see which one you like :)

Ok, I'm laughing at your cat pictures!
When Noah was little and he was being super good we would ask him if he'd been swapped by the aliens! LOL!
Mercedes

I have just watched Knowing :). You are lucky to have a son who's so smart. Smart boys always love their mums ;)! Cora's house is turning out beautifully! I also use emery boards for sanding ..lol!