Sunday, after we dropped the kids of at camp, we headed over to the The Trans-Allegheny Lunatic Asylum in Weston, WV. Please take a minute to check out it's history here: http://www.trans-alleghenylunaticasylum.com/main/history.html; it's also a link to their homepage....you can find out more info about visiting here, too! Lots of interesting things go on at this place!! So...

When we first pulled into town, we could see the clock tower over the once lived in town. Yes, they're are people who still in town, but there's also a lot of abandoned buildings, too!

This place is BIG!! This is the front Entrance: Could you imagine driving up to this place on a dark night?? 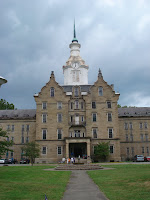 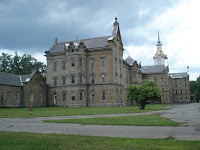 The stonework is just something that makes you think.....This whole place was hand carved! 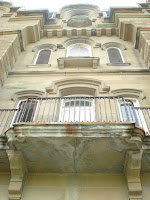 The detail is incredible!! 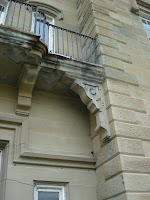 Remember, this hospital was built in the late 1800s, but stayed open until 1994. You will see a lot of old things, as well as newer things.... 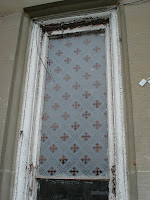 Don't forget to click on the pictures to make them bigger... 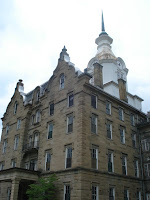 There's a lot of detail to see!! 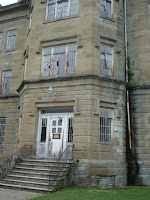 These pictures are still of the front side of the main building....We were only aloud to explore the front outside. Due to gopher issues......there's lots of holes, and they don't won't anyone to get hurt.

Click on this one and check out the 'gargoyles'....interesting theory, huh....keeps out evils spirits. 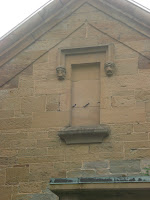 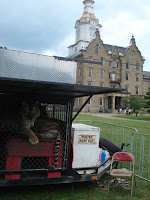 We had time to kill before our tour started, and naturally we were drawn to the 3 tigers that were behind the circus tent! 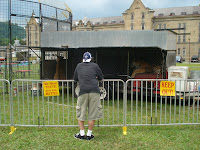 This one used her (We know it was a girl because their handler told us that all of them were females!!)....anyways, she's using her paw to scoop all the water out of their water bowl!! It was neat to stay and watch her...and when she got done, she went over and sat in it! The water that is, not the bowl:) 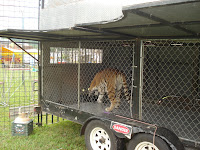 After we got done drooling over the tigers, we walked over to a building that flanked the left side of the asylum. It was known as the Psychiatric Unit. I found another great site with some really useful information if you want to know more. You can find it here: http://www.thehospitalrudeawakenings.com/id5.html 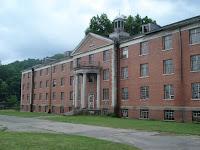 You couldn't go in here......It's not safe. But, I tell ya.....We really wanted to, we'd of explored all of the building if we could of.....But the only one that is safe, is the main one. Even so, I was still able to get a couple of neat photos from it!! I would love to see what the inside of these buildings looked like when they were first built, and when they closed. From a miniaturist's stand point, I'm very intrigued!! Who knows....maybe one day I can do a mini asylum!! Now wouldn't that be something? 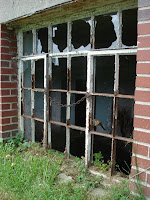 Look to the top right of this building.....see the caged in area....interesting! This is the other end of the Psychiatric Unit. 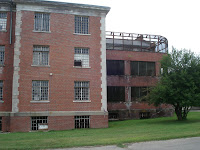 Next is the cafeteria...Look at the catwalk.....It was built so patients could get to the cafeteria from the second floor. 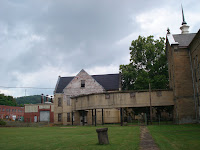 This next brick building is the Medical Building....I'll get to that in a minute.....but first look at the back right of this picture...it's the 'Forensics Building'...also known as Criminally Insane Building....the worst of the worst were housed here...I read somewhere that Charles Manson spent time here, but I'm not sure if that's a rumor or not. 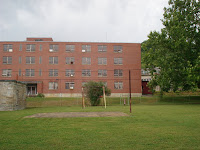 Back to the Medical Building....It is what it sounds like....a hospital. After awhile it made more sense to have a hospital on the grounds than it did to take 'sick' people across town. Here's where everything from a cold to depression was 'treated'........ Although I still don't know what good all those Lobotomies they were doing, were actually doing. I spent some time reading about them before we left for the trip, and all I can say is WOW!! If you care to see what one is, watch this You Tube video: http://www.youtube.com/watch?v=_0aNILW6ILk Let me warn you now....It's harsh!!

We heard a few stories, but nothing tops that video...That man actually did Lobotomies here, too....He drove around in a van, and did on average 10 a day...And we were told he did over 20 one day! 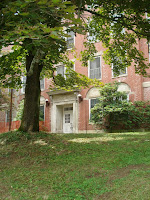 These are all the pictures I have of the outside buildings...There are more buildings.....but like I said, we we told to stick to the front, and stay with our tour guide. Next time, I will come back with the pictures I took inside the main building.
Posted by Katie at 1:54 PM

Wow! What awesome buildings and you took great pics! Thanks for the tour.
Mercedes

You know Katie, 1/2 way through this post, I was thinking, hmm, Katie will want to miniaturise this and I was right !!! :) I am fascinated by asylum as well, that's why Batman is my fav super hero.

I would like to visit there, I had a family member die in the hospital in 1907 and she died of TB. So, we don't have many records of her, because she died at the age of 22 and I am looking for some records to put in our family history album. Thanks for the tour. When my husband returns from Afghanistan, we are going to take a trip.
Susan