This will be the last of the cat pictures.....for now, anyways, lol!!! Remember Rufus....our stray. He's still comes twice a day to eat, and hangs out with me for lots of head scratches. I took this picture over the weekend...And I have to say it's one of the best pictures I've taken in awhile!! He's so sweet! But I have learned, that he bites when he's done being pet!! LOL! 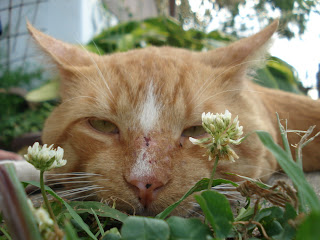 Thought you might be curious to see how we are keeping Otis out of the cabinet! Yes! Nails!!! LOL....the only reason we nailed it shut is cause our kitchen needs to be redone! We'd never nail nails into beautiful cabinets!! The bf bent the nail over, as you can see on the right, and to open the door, you just turn the nail down, like the left.......And it works!!! LOL

So.......Otis found a new place to sleep! I swear, he does this on purpose.......look at him resting his head on my shingles!! Remember when I first put them on, and how scared I was that Otis would break them, lol....well, So far they're holding up......as long as he doesn't eat them! 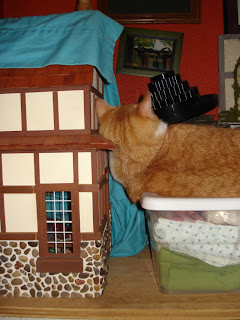 LMAO......So, I moved the container that he's sleeping on over, so he couldn't rest his head on it, and No sooner than I turned around...This is what I saw!!! 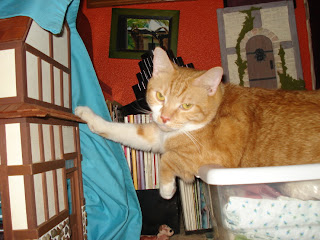 And yet....he's such a good helper! Here he is, leaning over the back of the couch with Daddy, trying to fix the AC unit! I thought the two were so cute together! 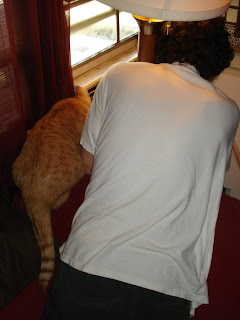 Well....still no work on any minis....I'm just not feeling it here lately! I'm sure it will come back soon, maybe I just need a mental break! Also, I must get in and dust of the Let's Make Lemonade site, lol.....and update it! I need to post about a beautiful cake that I recently bought from Rachel....and a blog that I think ya'll will find interesting! Need to find some baby pictures for Fluffy Bricks......Oh, and I have a award to get too!!! Wow! There's lots to do:)
So, until next time!
Katie
Posted by Katie at 7:22 AM

PMSL... Otis is just so funny, love the pictures Katie..xx
Hope you soon get the mini urge back again, I'm desperate to get some mini's done but not enough time in the day at the moment..xx

I love your pictures and stories about Otis, and Rufus too of course. They remind me so much of my Rusty who is also an imp.

I just received your poster and books this morning. Thank you very much. I put them in the room right away and posted pictures on my blog. Thanks again Katie. They are great.

Nailing the doors shut... hmm... So how long do you think that will last before Otis figures out how to use the claw end of a hammer? I think that's why he was helping the bf... he wants to figure out how to use tools! ;-)

Keep on showing the cat pictures! They are great!!

Otis is the coolest cat!

That is one crazy cat!
Mercedes

I love Otis! And he loves the dollhouse! Funny. Priss, my cat, has been snoozing in the garden shed until I rescued it. Should have snapped her pix in there. And Priss is like Otis, following us around like a dog and seeing what we're up to!

Katie, I have an award waiting for you on my blog. Please come pick it up anytime.

Katie, yoohoo! I have given you an award you can pick up on my blog!

I'm totally familure with Starlight Express! I've never seen it but I kow it's that radical play on roller skates.
I think you should be in that Katie! I think full time reherasls and 4 night showings would be good for you! Next life I encourage you to audition. Can you imagine at age 9!? ;P

P.s. This is a sincere but silly sense of humor of mine. Catch ya later ;)