Here's what I thought was going to be a finished product.... until I got the photos in photoshop and realized I hadn't dirtied up the nail holes yet..... lol, I know, you probably have no clue as to what I'm talking about... These doorknobs have nail holes... so I went ahead and dropped a drop of cream colored paint in each hole to make it look like there was a painted over nail head there.... But I forgot to go back and muck them up before I took them out for their photo op.... They have since be fixed, and will be rephotographed and listed before the weekend is up.... at least that's the plan.

But I still wanted to show you the pictures I took today:) I had door knobs, just not posts- so I made some wall hanging birdhouses instead..... I LOVE this one in this rose!!! 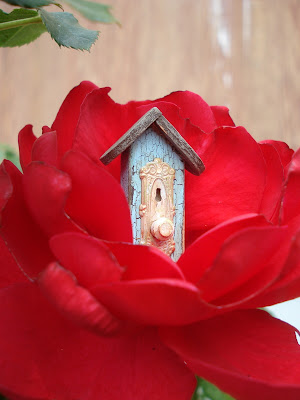 I tried to get a shot of them with the blackberries... but the brightness of the berries has washed away the color of the birdhouse. This one is a light teal color. 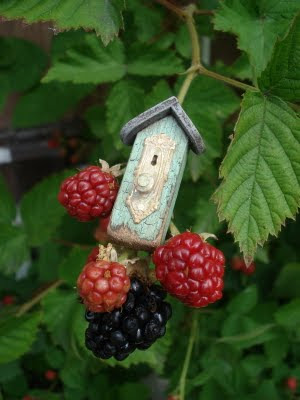 This white one washed away, too.... but I like the concept of the pic so I'll keep trying for that perfect shot:) 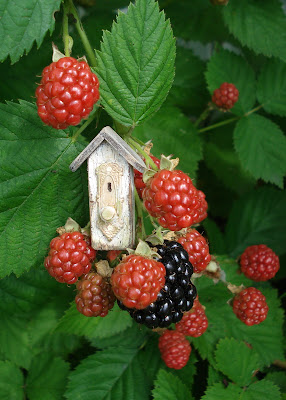 I do like how delicate it looks in the hydrangea bush.... Very Girlie!! And look.... we have another visitor... see the spider? one the left side? 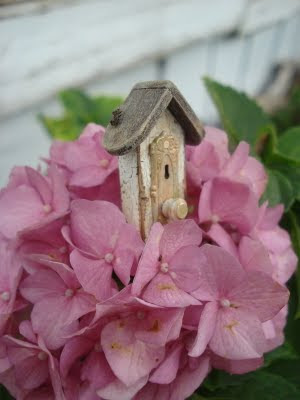 Yesterday.... I let the kids taste the black berries and they were still a little sour..... but today, after I noticed the birds have been enjoying their new found buffet, I went ahead and pulled the ones that were ripe..... I still can't get over how big some of these are! 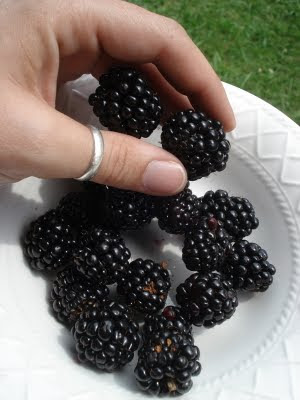 Tomorrow we're are either going to have blackberry pancakes or we're going to have fresh blackberries on our pancakes..... Haven't really made up my mind yet..... I just know they're so good! Reminds me of being a kid and going for walks with my Dad..... We'd pick them and eat them as we walked through the country side:) 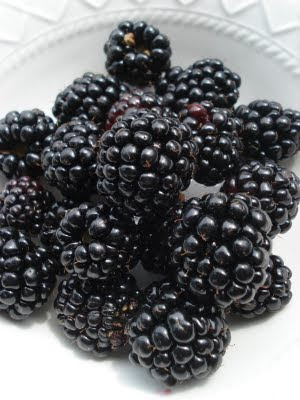 And my last pic is of one of the little birdhouses I will be listing later this weekend.... I really do like that tiny rose image.... especially against the green like that:) 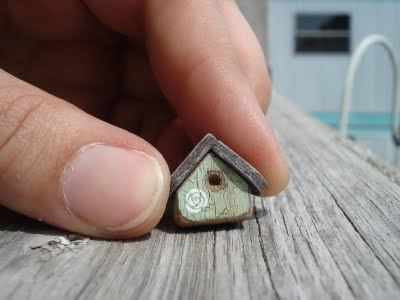 Love the new photos and the new houses too! Feel better!

Just wanted to let you know how much I love your blog. Your new bird houses with the door knobs are amazing. I love the paint effects you use on all your pieces. Cant wait to see more from you.

I love your bird houses mucked up or not lol. Yummy them blackberrys look wonderful do i get an invite ;). Take care of yourself and dont do too much to soon. Have a nice weekend. :)hugs

The hydrangea bush one is my favourite!

wow, "amoras" , means berries in Portuguese, I love them and I also remember to go to the fields and get very dirty....
Your tiny tiny bird houses are so sweet, as always.
Love
Ana

homes for your birds are adorable! I love your photos, so cute, among the flowers! and your blackberries are huge! lucky you ...
how's your back? better I hope ....
Give us news of your analysis of the calculations, I'm worried about you ...
kisses and good start to the week!
Caterina

oh Katie- those new birdhouses are too fantastic! Makes me want to work on my sunroom- but I just don't have extra time right now :( The blackberries look so delicious! We just ate strawberry shortcake with our very first strawberry harvest yesterday and it was sooooo good! Hope you have a super week ♥