The first rule to keeping the cat hair out of your polymer clay, is to keep the cat away from the polymer clay. Obviously, my cats could care less.....actually, I'm lucky to have a spot on the table! At least they're not laying in the middle of it! LOL!! 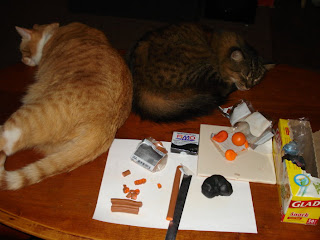 Chris (http://www.candidcanine.blogspot.com/) emailed me yesterday, and suggested I make some orange and black bowls.......Halloween is right around the corner, and what witch wouldn't want a Halloween bowl??? I used Fimo-Soft polymer clay for the first time..., I normally use SculpyIII......here's what I think. It is much easier to mush up and work, although I found it a little difficult to mix colors. I do like the look of it after it has been baked, it's shiny!!...and I didn't use any sealer on it, it's just the way it bakes. I do believe I will use this clay again, but I still like my Sculpy!

I tried to make a pumpkin cane....my only excuse is that it has been awhile since I made a cane, so they will get better! My son picked a bowl up off the table, and asked if I had made another mushroom one, and I replied with "It's suppose to be a pumpkin..." Either it was what I said, or the way I said it, but I haven't seen him laugh that hard in a long time!!! I didn't think they were that bad! LOL.........oh well....back to the drawing board. 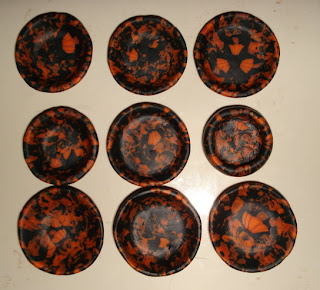 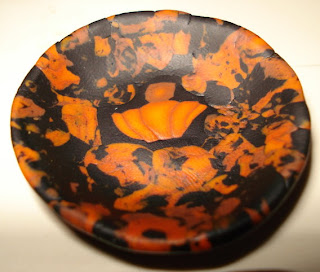 You mean instigator... ha! Hey I like it!!! some pots would look cool like that. (hint hint) ha! I'll be doing a blog soon on your creations... you come up with the neatest ideas! (Like the haunted house too!)