When I turned on the computer this afternoon, I honestly thought the headlines were a hoax! After losing Farrah Fawcett

this morning to cancer………I just couldn’t believe my eyes!

Another American icon, Michael Jackson, has died this afternoon…..And I thought I’d take a minute to say thanks to the music that he shared with us! I’ll never forget the first time I watched Thriller on MTV…..MTV was brand new (or at least in my world it was), and it was almost taboo in my house to watch it. But I remember getting home from school, before my parents returned from work….and rushing to turn on the TV to watch MTV…Even if it was only for a minute….I just had to see something. I do remember watching the Thriller video for the first time…I watched the whole thing and didn’t budge until it was over. I sat about 2 inches from the TV, hunched over on a bar stool, watching in awe…..Not only was his music awesome, but his video was like something I had never seen before! It made me want to dance! Yes! I have tried to do the Thriller dance several times in my life, and I am sure you have, too!! And if you haven’t tried the Thriller dance, I’m sure somewhere in your life, you’ve tried to moon walk something!

Stepping forward a few years, and the time of CD’s came about. I was always the last one to have new technology…..and it was no different with the CD player. But I do remember my first CD! Yup! It was a Michael Jackson CD!! The Dangerous album! Although I must admit, I’d rather of watched the MTV videos! I mean, come on now…….Who else could dance like Michael did?? Ok, Maybe James Brown could….But For Real….Michael has lead the way in the music industry! 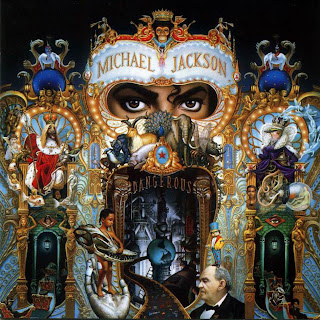 Flashing forward 15 years………I found myself taking a cross the country drive with my Sister. Along the way, we managed to pull of a trip to The Rock and Roll Hall of Fame in Cleveland, Ohio! There’s something about seeing those famous articles of clothes that the Great Ones once wore! I never really realized how tiny Jimi Hendrix was until I saw his outfits on display. But it was Michael’s clothes that really got me excited! His glove! That famous glove was there, shining ever so brightly. And if my memory serves me correct, so were his clothes from different videos that he has done! Either way, it was very exciting to see a glimpse into their lives! 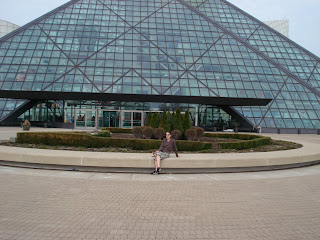 So with that being said……I just want to take a moment to remember a legend. Remember what he has done for the music industry! 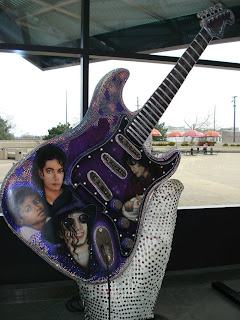 I know there’s a bunch of controversy surrounding Michael's life, and I understand that every one is entitled to their own opinion! Mine is simply this: I was not there to know the truth of the matter. And that there is always 3 sides to every story….His, hers and the truth. I just know that Michael Jackson made Great music! Music that made you want to get up and Dance! Thank-you Michael for sharing your passion with us! I only hope you can find peace in the after life!
Posted by Katie at 8:32 PM

Gosh I heard about that at the bank today.

I remember how big a fan my cousin Anne Marie was, she'd sing his songs while getting her make up on. Then she'd do the ow and it would make me laugh and smile inside and out.

Who was Farrah Fawcett again?

Katie didn't we all want hair like Farrah Fawcett.
I was one of the lucky ones that actually saw Michael Jackson perform. I think everyone is shocked at the news but I agree with you I hope he's finally found Peace..x

I have just heard the new in the radio on my way to work, I am shocked, he was only 50 years old!

Rest in Peace Michael. I agree Katie- no matter what he was in his personal life, he was a huge influence in music and a legend. I have done my share of moonwalking in my youth :) I think I'll be doing some moonwalking in the office today as tribute :)

LOL, OK Can someone translate what Dora said???

Tara~ Farrah was one of the original Charlie's Angels....She's also done a lot of movies about women's issues~ on Lifetime.....

Kim~ I did a little moonwalking last night:)

Katie,
yahoo bablefish says that Dora's comment translates as this:

I cannot believe michael to me Jackson has died. I feel sincerely it very enormously, for my was an icon of music, I have its music and will last in my memory. It rests peacefully.

I have to use the translator a lot! Wish I could speak more than just English :)

Thank-you Kim!! I wish I could speak other languages, too!! But I insisted on taking Art classes in school instead:)