You asked For Pictures...

You Got it!! LOL!! When I was at the thrift store yesterday, I bought a bag of 'Potpourri' for 75 cents! I'm going to work backwards here...hope I don't confuse anyone!!

I made my very first fairy chair last night. I found this 'seed pod' thing that curled around, and as soon as I saw it, I saw a chair. I stuffed the pod with Styrofoam, then covered that with moss......Even added a 'pillow'. The table base is another seed thing. Looks like a dried up avocado seed or something?? I made the table top from a dried orange slice. I still think the chair needs a little more character, but I don't want to over do it! 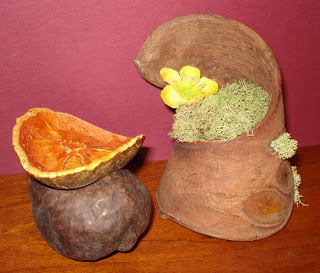 Next is a side view, I stuffed a little moss into a hole that was there. Here you can see where those seeds used to live. And this thing is hard, like tree trunk hard, wish I knew what in the world it was....it's neat! 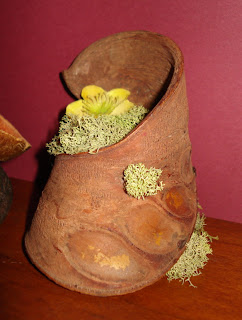 And a back view.....I took the moss all the way around. 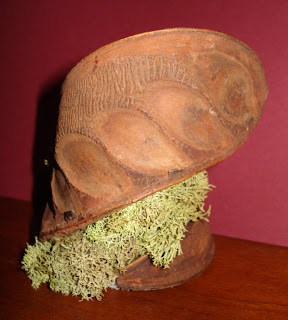 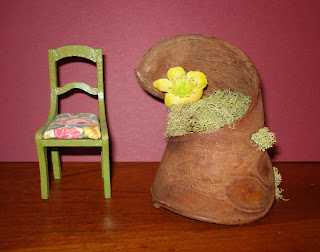 Next is a picture of all kinds of weird things that were in the bag...This has to be the strangest bag of potpourri I've ever bought. I would like to say the most of them seem to be some kind of casing for seeds, if you shake them, they make noise!! 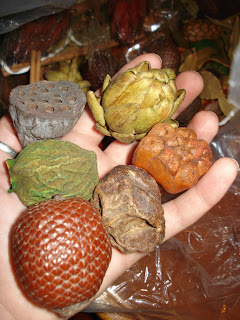 Here's a peek into the bag! There's cinnamon sticks, mini corn cobs,............and well, other than the orange peels, I really have No clue what the rest of it is, Hahaha!! 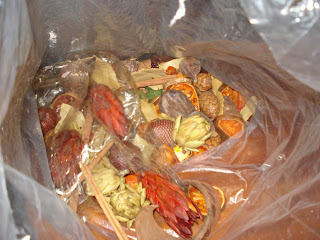 I also bought of bag of coasters for 99 cents. I wanted to pry of the wood pieces and use them around Marshmallow Manor. However, there not really coming off that easy....I'll have to try throwing them in the microwave for a minute and see what happens. 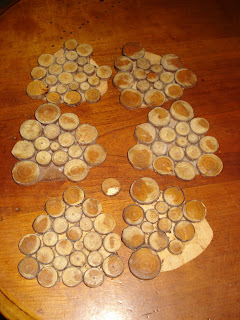 And as promised, here is a picture of the Lego's that Sans sent. Drew and Cameron had a lot of fun building and then rebuilding these little kits, Thanks again Sans!!!

And for all you Otis fans out there....This is another reason this cat is still here, He keeps me laughing!!! He's such a dork!!! We were sitting on the couch and happened to look down and see that Otis had curled up in a shopping bag, and was using it like a sleeping bag. He has his head through on of the handles!! ***Attention, I don't suggest leaving your cat in a bag, but under close supervision, it's OK, to laugh your head off!!! 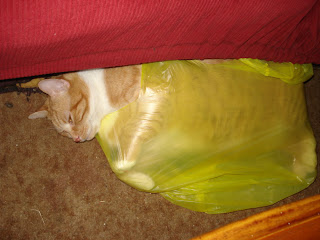 Those pod things are weird, but what an interesting idea!

Hey I was thinking of getting True Blood since I'm a Luddite and dont' have cable. ha!

Otis is a riot! Too funny!

Katie, those are so great! I love the moss tufting out everywhere... and the little pillow!!! I bet you could bust open (or saw open - haha) a couple of those seeds and do some cool stuff with them!

That bag of pot pourri is gorgeous! :). I think your fairy chair and table is really cute and great idea too with the coasters.

Katie, your fairy chair is neat. It is a gigantic seed pod of some kind. It looks like a larger version of our Mesquite bean pods. They curl on the tree and that throws out the seeds. You found a real treasure in that bag. Keep up the good work! Great imagination!

I really like the fairy chair! What a neat idea.

Otis is such a goofball. Give him some love for us. :-)

Oh my gosh! I LOVE that fairy furniture! You are so creative to visualize that in a piece of potpourri! Looking forward to following your progress on your little fairy abode!